ELECT A JUDGE BASED UPON MERIT NOT PARTY AFFILIATION 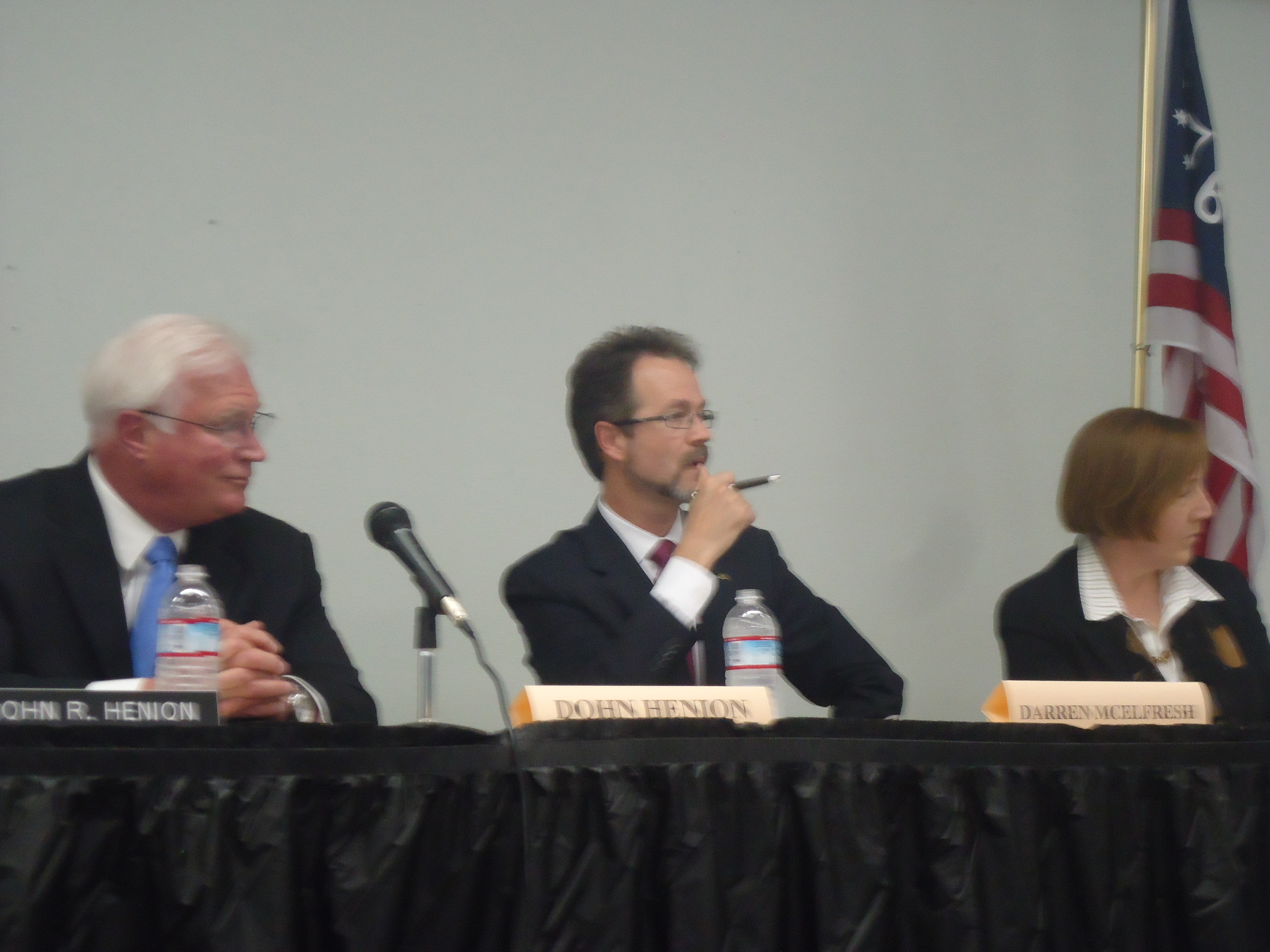 The Tea Party Patriots hosted the District Attorney and Judge Forum. Today’s story will reflect the questions and answers of the two candidates and one appointed Judge. Judge Doehle, who was appointed and not elected.  Her opening statement, “My name is Chris Doehle, I AM THE JUDGE.  I am the only candidate that is running that has experience in the position. I was appointed by the governor based upon background information and based upon the Jenni investigation and evaluation”.  Ms, Doehle stated that out of four people who submitted their application she was the “chosen one.” She stated that, “I’m in the position so there is no question I can do the job”.

Later in the forum Dohn Henion revealed that he did not submit his application for appointment because after thorough research  he discovered he was the wrong party. Which raises the question. Do we want to elect a Judge based upon their Party affiliation or based upon their experience in the Court Room.  Honorable Judge Doehle was endorsed by Honorable Judge Follett, and other Judges in this County and Humboldt. Ms. Doehle had intricate knowledge on how a judge is selected for appointment. (Wink, wink, aka working the system.)

Darren McElfresh stood up before the packed crowd for his presentation and opening statement on why he should be elected as Judge which was passionate, moving, and direct. ” I have lived here for 20 years and I believe Del Norte County deserves the best. We deserve real representation we deserve someone who has  practced trial law and we deserve someone who has had this experience prior to taking the bench. Anyone who takes the  bench who does not have this type of experience essentially does the community a disservice. Our children and families lives are at stake and their livelihoods. I have that experience. literally I have practiced thousands of cases, I have prosecuted as well as defended wrongfully accused from murder, to family law cases, to complicated civil action cases involving 75 witnesses involved and a thousand documents, to juvenile, to custody cases and family law cases,  to conservatorship. What that trial experience means is that it will no longer be a candy store for criminals, it means there will be no more sweet heart deals for repeat offenders, it means there will be no more unnecessary delays in trial courts where victims have to return to court again and again and again, costing tax payers  thousands of dollars. In my experience I have handled 10,000 hearings throughout my career. I am the only candidate for Judge endorsed by the Police Department Employee associations, The Sheriffs department employee associatiions, and the only candidate that has Death Penalty certifications, and the only candidate that has served as deputy district attorney. That is what you call real experience and real representation”.

Don Henion opening statement, ” For the last 30 years I have served as the City attorney, The county attorney, the Harbor Attorney, and the Solid waste authority attorney. I have been the legal adviser  to the city police department, the sheriff’s department, the probation department  and have been involved in several high profile cases that you may have read about in the local newspaper.  Representing local government  has put me in touch with what you want, because you are in touch with the local government. But more than that I am the one you came to when your neighbor sued you over a particular matter or your husband has died and you needed help in getting the details taken care of. I have been there prosecuting in Federal Courts, I was a prosecutor for the department of interior for six years and I have been a city prosecutor for ten years. I have done in excess of 80 jury trials and thousands of court room hearings. I have dealt with law enforcement enough that I have taken their training to subdue the nuts in our school yard and observed the stress  the officer’s experience  when doing their job. 33 years is too much to explain to you in three minutes but the important thing is that I am the only candidate with a vast amount of experience and the best person to serve you”.

A series of five questions were asked and answered by each candidate, along with questions submitted by the crowd. The narrator then told each candidate to ask one of their opponents a question to be answered by that opponent, however all three candidates declined to follow through.

After hearing the opening statements from each candidate, it was clear to me who the best candidate was because his statement, and answers to the questions were to the heart and point of every matter at hand. Darren McElfresh knows the law, has current and ongoing trial experience and is the best of all candidates, he is not polished or generic, but authentic.

I appreciate Dohn Henion and Ms. Doehle, however, neither one could hold a candle to  Darren McElfresh who has more experience in the court room setting then the two years Ms. Doehle had as a working judge and Mr. Henion had with his public law experience.