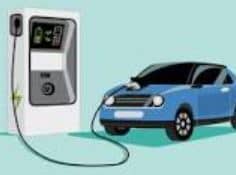 It would appear that the recent news about all forms of electric
vehicles is uniformly bad.  Originally they were a relatively harmless
bit of vanity showiness that the wealthy paraded around in when they
weren’t being driven in stretch limousines.  Kind of like a message to
the “regular” people that they were “saving the planet” from all the
sordid habits of the “little people” in their gas guzzling behemoths
that were “causing” Climate Change.  Not that they really cared, but
they could afford to virtue signal.

Here we are now well into governments at all level prattling on about
the “evils” of your gas or diesel powered vehicle and the “need to “buy
an electric car to save the planet”.   Course no one bothers to mention
the fact that an electric vehicle is well beyond the financial reach of
all but about 17% of the US population.  Nor do they mention that it has
recently been exposed that maintenance costs are much higher due to the
more frequent need to have your EV serviced.  Clearly the notion that
EV’s are 22% less expensive when it comes to service, neglected to
mention that they need to be serviced far more frequently.

Of course we have known for some time now that the energy required, most
of it carbon fuel supplied, to manufacture that virtuous EV far exceeds
that of your regular tried and true, but gas guzzling beast.  Not to
mention that troubling detail of how to dispose of the battery that
powers your vanity car.  Seems the negatives go on and on, and all you
have to do is fall into line and get your problem child by 2030.  But
things continue to get more troublesome for the EV virtue crowd, less
that 10% of cars on the road presently and not much of a rush to
switch.  No nation wide charging stations, in spite of “best” efforts of
national and “blue” state governments.  Guess 200 miles or less on a
charge doesn’t have the appeal of filling your tank at the local service
station.  Then there is the minor problem of size.  A glorified “shoe
box” isn’t very impressive at the local car show.

Enough of the complaining, I say.  Run out and buy that potential
bonfire to roast marsh mellows and hot dogs.  Great, I understand for a
supplemental garage heater when it catches afire while charging.  Or
maybe while out for a spin in your trusty EV, it starts smoking, lights
up like a Roman Candle, as you escape you leave your phone in the car.
You can always use it like a signal fire to alert emergency services to
your plight.  I am not sure about personal vehicle use of an EV as
completely reliable, but the Biden Administration assures us they are
“completely safe” and would like us to transition to EV’s before you can
not buy anything else.

Unfortunately, “supply chain” issues have made parts for manufacture of
new EV’s problematic, making your new EV purchase a lengthy wait.  Buy a
used EV, you may wish to check on the “battery life” as a new battery
can and often does exceed the purchase price of your second hand EV.
And,  the chance of it becoming the substitute for the “home coming
bonfire” at the local high school could be a lock.

Speaking of schools, a heads up to all you parents out there, who may
not be aware of the movement in local school districts to purchase
“electric buses” to replace aging diesel powered, but much safer school
buses.   There has been a growing number of reported electric bus fires
forcing some municipalities to side line their entire fleets for safety
reasons.   Del Norte County schools are among the districts that have
elected to purchase electric school buses to replace older buses.  Just
saying….

So for all you folks out there who do not wish to be stampeded into an
electric car purchase by our government climate obsessed officials, a
little knowledge will go a long ways to keep you from making that
mistake, that is if you can even afford to be a “climate sensitive”
mistake.