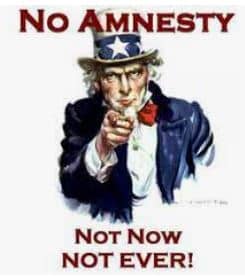 For a year and a half, one political party has dominated Congress and the White House. And for 18 months, that party has adopted the most unpopular immigration amnesty platform in our nation’s history. We have weathered a relentless assault on our nation’s sovereignty and self-determination while the Democratic leadership pushed an end to all enforcement and a mass, complete amnesty. The scope was breath-taking.

Never has our situation appeared so dire.

We had been waiting to see if the Democrats on Capitol Hill would return to certain historic positions on border security and interior enforcement: It did not happen.

As a result, nearly every prognosticator predicted that by now an amnesty would be signed into law – an amnesty program that would have completely changed the nature of American politics and governance forever.

They were wrong. And we are one good reason why!

Not that they ever gave up: Over the past year, Congressional leadership persisted, seeking to jam an amnesty for at least 8 million illegal aliens into a reconciliation package that can pass by a simple majority in the Senate. This was a truly dark moment.

But WE never gave up.

So last week, THEY finally gave up.

This is due in part to the Senate Parliamentarian agreeing with what FAIR’s influential government relations team had been shouting from the rooftops here in Washington: a mass immigration amnesty would not only alter national political dynamics, it would devastate American taxpayers: Its budgetary impact would be in the hundreds of millions or more; but the policy impact would be even greater.

For those who may wonder whether we are making progress, I point to the relentless counter-maneuvers we are doing every day against an array of forces hostile to the very idea of American sovereignty and citizenship.

No one knows the outcome of this year’s November elections, but experts predict – indeed we are predicting – one or both Houses of Congress may change party control.  Should new leadership have the opportunity, they will have secured that advantage in large measure because of the unpopular and irresponsible nature of the wacky border policies pursued by the Biden team. Arguably, a new Congress will have a mandate to use very constitutional means to reverse the Biden border policies.

FAIR’s government relations team has been working daily on your behalf to form a powerful coalition of public interest groups and former immigration officials. They (and we) are demanding that leadership commit to putting a robust border security bill on the floor of both chambers as soon as the 118th Congress begins.

We outlined our demands, and just last week, House Republicans issued a legislative framework checking nearly every box – from reforming our asylum system to mandatory E-Verify. And most importantly, a commitment to NO AMNESTY.

Dan Stein is President of FAIR.