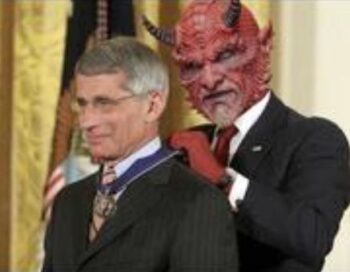 It was only a matter of time as the walls of misinformation began to
close in on our Covid Lord and Master, Anthony Fauci, that he would make
the change from insisting he was “following the science” to that of
following his own personal religion.  On Tuesday in an interview with
Neil Cavuto on Fox New’s “Our World”, Fauci was forced to admit that
“Covid vaccines, don’t work overly well against infection”.  Having
himself experiencing a Covid infection for the second time, twice
jabbed, and twice boosted, a reluctant Fauci was still pushing
vaccinations and masking to the audience no longer as a matter of
“science”, but rather as a matter of “his faith” that this was the best
solution for a rapidly evolving Covid virus that had become easily
transmissible.  Absent was his insistence that he was following “the
science”.  Could be that “the science” no longer supports Fauci’s two
year long insistence that masking, vaccinations, social distancing, and
lockdowns had any measure of success in “slowing the spread”, or in fact
doing anything that was effective against Covid-19.

The “science” is now saying that masking was pointless and produced no
measurable effect in preventing infection.  The science, further has
said that vaccines do not prevent infections and are 1.5 times more
likely to incur an infection over those that are unvaccinated.  The
science continues to rebuff Fauci’s contention that vaccines protect
against the serious cases of infection and hospitalization when that
protection diminishes in as little as two weeks after injection of the
vaccine, and has no measurable ability to protect after six weeks.

Fauci’s claims of a relatively mild experience with the virus “this time
around” after struggling with the effects for over two weeks and two
courses of the therapeutic, Paxlovid.  Hardly an example of a relatively
mild case.   Yet, Fauci immediately resorts to his religion by insisting
that ” a higher vaccination rate” will somehow “not give the virus an
opportunity to spread through our community.”  So no one has asked the
question, how is that supposed to work if masking, social distancing,
lockdowns and now the vaccines “do not work overly well against
infection”?  I think this is the part where religion steps in and we are
all supposed to have “faith” in Fauci’s personal religion and ignore
what science has been telling us through out the past two and nearly a
half a years.  That is Fauci has been wrong the whole time, as has the
Centers for Disease Control, Public Health, the Medical Establishment,
the Media, and for the most part our leadership.

Those that have been dictating to us as the “saviors of mankind” during
this pandemic have been for the most part dead wrong.  They do not
represent the science as we have been told, but adopted nothing more
than a religion which we were meant to have “faith in” at least until
the science caught up.  And, now the “chickens have come home to roost”
and Fauci’s “religion” has been found wanting.  Just like our lengthy
battle with Influenza and other viruses, we are not over and done with
its continued presence by any stretch of our imagination, but we now
know that it can be managed without all the demands placed on us to
conform to what clearly has been shown not to have worked,   …..
Overly well!