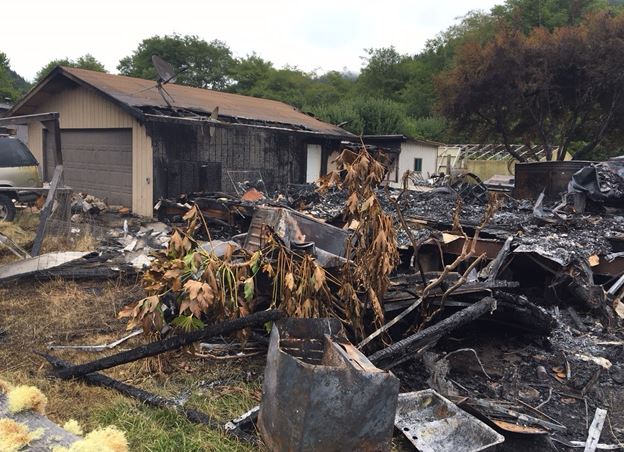 In the early morning hours of June 25th, Mr. William Clare’s home on Weber Drive in Klamath went up in flames.  He was trapped inside and his friend Timmy Maxey bravely attempted to rescue him, sustaining severe burns to 75% of his body.  He is currently in critical care in San Francisco.

Calls to 911 were made and the operator responded that emergency was aware of the situation.  Apparently there was confusion with a separate house fire having occurred hours earlier on the same street, but many houses away.  The 911 dispatch was told there was audible screaming and someone trapped in the home.  Dispatch did not send help.  A CalFire crewman was contacted by the neighbor who called 911.  CalFire did not receive dispatch.  Neighbors were later informed that there was not a single volunteer fireperson to assist in the crisis.

Mr. Clare’s neighbors took action, rescuing Timmy Maxey from the front porch, as he was not giving up on saving his friend.  The house was engulfed in flames and the windows were popping out from the heat.  He was crying out, “My Bill, My Bill, My Bill…”  Neighbors rested him on the grass across the street.  All of his cloths had burned off.  Still help was not arriving.  A friend of Timmy’s unwittingly applied cold towels to his skin, not realizing he was in shock.

The fire station and trucks were approximately seven houses down and the neighbors attempted to get equipment to fight the fire themselves, only to find the two trucks at the station both had dead batteries.

Finally, Firefighters arrived at 4:35 after 911 was contacted at approximately 3:30am.

An attempt was made to get a copy of the 911 calls regarding this incident and I was told by the supervisor that they do not do that.

How can a tragedy like this be avoided in the future?  A man lost his life and as of Tuesday morning (four days later) the Triplicate had not reported on it.   What happened at dispatch?  What happened to the fire equipment the tribe needed to provide to the community for building the casino?  Who is the fire captain in charge of making sure the equipment is operational?  How many volunteers does Klamath have?  What can we do as a community to ensure basic safety?  Is it feasible that Klamath could have an ambulance available?  An eyewitness recounted that Mr. Maxey’s skin was falling off as they were trying to load him in the ambulance and that Mr. Clare’s remains were removed with a shovel.  May the graphic horror of the situation be noted by the powers that govern our community.  May these men not have suffered in vain.

8 thoughts on “FIRE TRAGEDY IN KLAMATH”