First time at the Gasquet Raft Races – At 70! 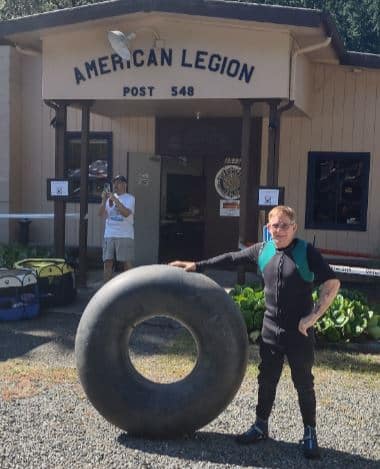 70 is sort of a luck number for me as I graduated in 1970 and reasonably proud of it for several reasons subsequent generations would fail to understand. But I decided to brave the chilly water of the Smith River and at least say “I was there, and I did it” (bucket list stuff.)

While I had arranged to obtain a wetsuit, it wasn’t needed at all. The
official temperature the day before said it would get up to 43 degrees.
The ocean, as a scuba diver, is @55 degrees and you DO need a wet suit
for diving. But once I was in the temperature was delightful.
I have been attending the raft races since my return to Del Norte in
2008, usually to watch the spectacle, get a t-shirt and munch on the

food with a couple of beers. I was aware of the route and had seen
small children in the race so figured it can’t be too ‘rough and tumble’
in addition to several ‘senior citizens’ Over the years I had seen every
manner of craft for singles as well as the ‘party rafts’ with 3, 4, 5 or 6
people. I had a raft I acquired recently but, in storage, it acquired some
holes. I tried to patch them the day before but there were more than I
knew about. So, I opted for an inner tube from Les Schwab.

In my mind I was thinking a regular passenger size tire tube but what
they gave me was more like a truck tire tube. The price was right and
had no holes. I was good to go. When I registered with my $35, I was
made aware of the ‘categories’… I was ‘over 41, a self-paddler (no oars)
and so was the first in the “800” category (9 categories overall).

I was down at ‘the forks’ starting point an hour before race time and
watched the people gather (one of the best parts of the event). As
starting time came closer, I took the proverbial plunge and put my tube
in the water. I paddled across the river and noticed a drone overhead. I
waved at it but had no idea who’s it was…until I later found out (see
below) I later discovered, of ALL the other entries I was the only “OLD
SCHOOL” entry with an inner-tube !

At race start the various categories were ‘released’ in sequence. I had
the intention of just letting the river take me, but my body had other
plans. Once I started to get down the river my arms didn’t stop
paddling until the end @4 miles later ! I did not think I would be any
kind of ‘contender’ but as the race progressed, I noticed many if not
most entries were just in it for fun. Several riverside parties popped up
along the way….as I passed.

There was only one point, the rapids caused me to capsize, and I went
under briefly. The rest of the trip was wonderful. Clear water, great weather, not to hot nor cold, a slight breeze and plenty of friendly people.

I was amazed, but very tired and grateful for a wonderful experience.
Second place finishers received their choice of gems and jewelry from a
local craftsman. There were a couple awesome bands for music, the
Port O’Pints provided the beer, the American Legion had an
outstanding brisket lunch.

If you have never been, the Gasquet Raft Race it is held the weekend after the 4 th of July every year and will be celebrating their 54th year next year.

One thought on “First time at the Gasquet Raft Races – At 70!”