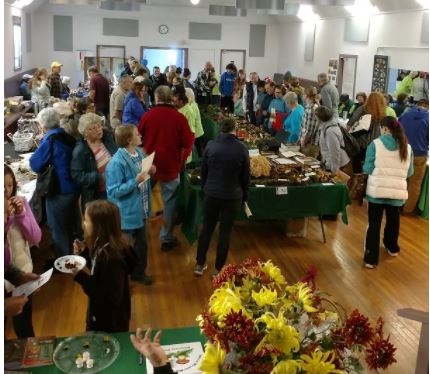 The Wild Rivers Mushroom Club’s first annual Mushroom Festival at the Chetco Grange in Brooking’s Harbor, Oregon yesterday was a phenomenal success. With a registration of 1200 people and many others who did not register at times it was almost standing room only.
The membership collected hundreds of specimens which dotted the moss and plant covered tables. In addition the Keynote speaker Professor Dennis Desjardin and co-authors Dr. Michael G. Wood and Dr. Brian Perry brought several other unique fungi. There were several vendors including exhibitors of dehydrating and mushroom dyed silk scarves. One of the stars of the show was the 10+lb cauliflower mushroom pictured below. The membership provided several food items from the kitchen while Chetco Brewery was on hand for refreshment. Throughout the day there were several workshops and two mushroom talks. Professor Desjardin’s talk was attended by 90 at the Brooking’s Senior Activity Center.
The event was capped off with a dinner at the Art Alley Grille. Professor Desjardin was awarded a framed certificate of appreciation to which he said the Wild Rivers Mushroom Club should be very proud of it self for an outstanding first Mushroom Festival. He went to say he wished some of his lectures at San Francisco State University were as well attended as his keynote speech.
The Wild Rivers Mushroom Club meets at the Harbor Fire Department building at 98069 W Benham Ln Harbor OR the Second (2nd)Sunday of each month from September to April. Membership is $10/year. Further details can be found on it’s FacebookPage:  https://www.facebook.com/groups/288460051569870/