Fluoridation Could Be Banned 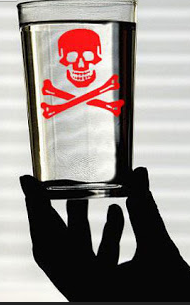 While Crescent City and Del Norte County no longer have to worry about the addition of fluoride to the drinking water because it was voted out in 2012 due to the company never providing some basic information like toxicology reports and safety reports, most of the rest of the United States does fluoridate or about 75% of the population have access through their public water systems (about 211 million people).

For almost 80 years, American’s have been conditioned into thinking that drinking fluoridated water will reduce cavities in their teeth. The dental lobby has been and continues to be instrumental in proliferating this propaganda.  Forget about the harmfulness it does to the body and the brain.  And there’s the rub.

In a bold and creative move, Attorney, Michael Connett figured out that suing under the Safe Drinking Waters Act to ban fluoride in the United States would not be effective.  Here’s why to paraphrase his father, Dr. Paul Connett,

The EPA dragged their feet for 12 years after being warned by the National Research Council to  review a new safe drinking water standard. But instead they are still working under the ancient 1986 standard of 4 parts per million (ppm).

Instead of suing under the  Safe Drinking Water Act which is under the  Water Division of the EPA which is owned lock, stock and barrel by the dental lobby on this issue, they are just absolutely pathetic, he sued under the Toxic Substances Control Act (TSCA).

Court Case #17-cv-02162-EMC in the US District Court Northern District of California revolves around the Toxic Substances Control Act passed in 1976 that regulates the introduction of new or already existing chemicals.

The plaintiffs have 300 studies of neurotoxicity and want to ban the deliberate addition of this known neurotoxin into the drinking water. Before suing in court, they submitted a citizen’s petition to the EPA.

After 90 days, the EPA denied their petition and said there isn’t substantive grounds And when the EPA did that, Michael sued.

Here is the list of organizations that joined the lawsuit:

The first thing the EPA tried to do was get the lawsuit dismissed.

Federal Judge Edward M Chen wrote,  “The text of the TSCA, its structure, its purpose, and the legislative history make clear that Congress did not intend to impose such a limitation in judicial review of Section 21 citizen petitions. The Court therefore DENIES the EPA’s motion.”

Next, they (EPA) tried to deny full discovery.

The most delicious part of this whole thing, whether it takes 2 or more years, is that for the first time ever, they will get to depose the EPA’s experts and officials!  They EPA have avoided this for years.

Dr. Paul Connett is excited because they have 300 studies to back them up that fluoride because of it’s neurotoxicity diminishes IQ.  He asks, “Where is the EPA’s studies?”

Will the arrogant use of power be overcome by justice?