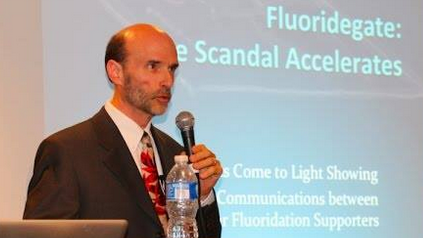 The documents were released after a nearly four-year wait. Text on a large number of pages was concealed by federal employees prior to release, but the text that is not obscured contains explosive revelations.

A previously uncovered document had shown American Dental Association officials asking Assistant Secretary for Health Howard Koh for help because they felt the issue of fluoridation harm to minorities had “the potential to gain traction.” The new documents show what happened after this request.

CDC official Ursula Bauer wrote, “HHS is very concerned about the community fluoride situation here in Atlanta getting out of hand and escalating into similar situations across the country.”

In the new documents, officials describe unpublished information in their possession showing African Americans experiencing 61% more “dental fluorosis” than whites (58% vs. 36%). Dental fluorosis is a permanent disfigurement of teeth caused by childhood overexposure to fluorides.

About the civil rights leaders’ statements, CDC’s Dr. William Bailey wrote, “This may be a significant threat, especially if other cities / mayors / councils / legislatures see fluoridation as an intervention that creates fluorosis disparities rather than reducing disparities for tooth decay.”

The revelations draw attention to the back-story behind federal officials’ final recommendation last month to slightly lower the amount of fluoride in fluoridated water, ostensibly to reduce levels of fluorosis that were described “in most cases” as being “barely visible.”

Stockin says, “Before the ‘spin’ that fluorosis is a cosmetic condition, the Journal of the American Dental Association termed fluorosis a pathologic condition. This reflects toxicity to hard tissue teeth. Fluorosis is the tip of the iceberg of what fluorides also do to soft tissues.”

The HHS’ small reduction in water fluoride levels to reduce fluorosis was apparently of questionable effectiveness even to CDC employee Eugenio Beltran.

Referring to HHS calling for a small reduction in fluoride levels in water and use of the water to make infant milk formula, he speculated, “I am not sure if the reduction… inGeorgia may produce an effect if there is no change in the feeding patterns.”

He hypothesized that increased fluorosis in African Americans was not due to swallowing more toothpaste, but rather that “higher consumption of fluoridated water earlier in life” could be the cause.

In a letter calling for hearings, Rev. Owens voiced alarm about fluorides.  He stated, “There are more patients with kidney disease and diabetes in the black community, and this is all the more reason federal officials should have told us that kidney patients and diabetics are especially vulnerable to harm.”

“Fluoridegate is about officials being more concerned to protect water fluoridation at all costs than protecting the health of the people they serve,” Stockin says.