Flying Out of Crescent City 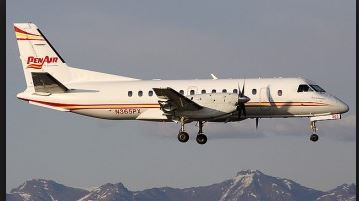 In a recent Coastal Voices piece printed in the local newspaper, our esteemed director of Del Norte County’s regional airport, Matthew Leitner, waxed poetic about the recent circumstances surrounding the Airport commissioner’s decision to go with PenAir as our lone commuter airline with several flights daily to Portland, Oregon.  He makes great effort to spin the idea that flying to Portland before reversing course to end up in Sacramento is not as bad as it sounds.  He continues by regaling us with gate to gate flying times as well as the ability to fly to many other nonstop destinations in California that might be enjoyed while flying on Alaska Airlines.  He proceeds to talk about other destinations from PDX, ease of luggage handling, and the weather issues avoided by not flying in and out of San Francisco.  His final pitch is about the comfort of PenAir’s Saab 340 airplanes and the extra leg room that you may enjoy for the first one hour and forty minutes of your journey.

And then reality must at some point set in.  While Mr. Leitner’s points about PDX, flying to Portland, and the like might be technically for the most part correct, there are some rather staggering issues that he does not even talk about.

I understand that he has come on board rather late in the game and he is not responsible for some of the disasters in judgement that preceded him.  It is important for him to understand that we were promised by a former set of Airport commissioner’s that in order to retain our previous air carrier, Sky West, the airport’s runway would be extended to accommodate small commuter jets, a new safety fence erected, and a new terminal built.  We were told this would be accomplished by 2012 and everything would be right with the world.  Well, none of that happened.  There are a lot of reasons as to why, but finger pointing at this late date is not productive.  The bottom line is that we lost a carrier, Sky West, which was not perfect, but it did fly you to both San Francisco and Sacramento daily in under two hours for a little over $200. When they moved the flight times to later in the morning, much of the fog and weather related issues to San Franciso went away. Luggage handling was never an issue.

Having used Sky West in the past on many occasions, as well as, having flown on one of their commuter jets, I can say that this was generally a good experience.  And if it was still possible, I would still be flying out of Crescent City.  Some of the differences between then and now are more than likely why the airport’s current director is making a plea to the community to take advantage of PenAir’s services to Portland.  Just as I no longer utilize the air services at the County’s airport, I am sure many others are discovering what I have found to be the case with air service to Oregon.  Increased cost, more time spent for domestic travel, and the limits that PDX, a much smaller airport, has to offer as opposed to SFO are just a few of those issues.

The Portland airport has but seventeen air carriers that operate out of its terminals, of which only three carriers offer international non stop service, one of which, the only one to Europe is not daily.  SFO, San Francisco’s airport, has over fifty airlines that operate out of its terminals with dozens of non stop international flights daily.  Domestic non stops from PDX are around thirty, Sfo has hundreds of non stop domestic flights. Because of the sheer difference in volume between the two airports, SFO’s flights are often hundreds of dollars cheaper than those out of PDX.  Similarly flight times and flight options are overwhelmingly of greater variety at SFO than at the Portland airport.

Mr. Leitner’s claim of a 3 hours and 45 minutes gate to gate Crescent City to Sacramento flight must not include the time spent changing planes in Portland, because the flight time alone is near that much.  The fastest time I could find was a shade under seven hours.  The best fare was near $600.  When you look at a cost, flight time length, and variety of daily flights comparison, there is no comparison.  The idea that flying to Portland is a “good thing” is just so much rubbish, unless of course that is where you want to go.

The bottom line is, that we have been sold a bill of goods. While it is too late to do anything about it, no extended runway, perhaps no new terminal, only the safety fence, it seems we are worse off now than we were before.  I suspect that from the tone of Mr. Leitner’s Coastal Voice’s piece, PenAIr service to Portland is not in the best of health.  As such, this is further evidence that things for the past twenty five years or so, have not improved and the mistakes in governance continue to pile up and affect the over all economic health in Del Norte County.

Earth to Mr. Leitner, there is a daily commuter flight from Arcata to Sacramento International for around $211 which gets you to Sacramento in under two hours.  A flight from Medford to Sacramento takes about five hours through San Francisco for around $500.  While the convenience of flying south out of Crescent City in a reasonable length of time and cost is gone, there are other option than the flight north to Portland.  Besides, it now may be quicker and cheaper to just drive to San Francisco or Sacramento than fly north.

I am sure that Mr. Leitner did not mean to deceive us with his glowing account of travel to Sacramento via PenAir/Alaska Airlines, but that is what it is, deception.  While we no longer have our former options, it is left to us the consumer, to decide what are our best choices going forward.  Using PenAir might just not be one of them.

5 thoughts on “Flying Out of Crescent City”