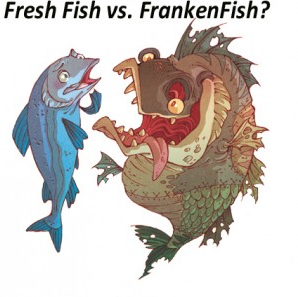 Credit to The Hill.com – November 19th, the FDA has ruled that genetically modified salmon is safe to eat and salmon dubbed by critics as “Frankenfish”, became the worlds first GE (genetically engineered) food approved for sale.

Some interesting facts about GE salmon:

AquaBounty Technologies is the producer of AquAdvantage salmon.  They inserted DNA from several other species to create a fish that would grow twice as fast. Ron Stotish, chief executive officer of AquaBounty based in Massachusettes, said in 2010 at FDA hearings that his company’s fish product is safe and environmentally sustainable.

Some rules the FDA set down:

According to Attorney George Kimbrell, senior attorney for the Center for Food Safety, one study found that if just sixty GE fish escape, it could result in the extinction of 60,000 native fish in less than forty fish generations because the fish grow faster than wild salmon.

It will be cheaper to the consumer to purchase than wild caught salmon.

If fish consumption continues to increase, it’s far easier to propagate GE salmon in an environment not tainted by oceans contaminated by pollution and radiation from disasters like Fukushima.

Since the DNA from Chinook salmon and the DNA from  an eel-like species called an ocean pout cause it to grow twice as fast, the profits from this venture are sure to be a good one. Although their stock (Symbol ABTX) was at a high of $18 in January of this year and is now down to $12.24 today’s date on the London Stock Exchange. From researching their financial statements, the company’s inception looks to be 1991. In 2012 they had to reduce their staff from 27 to 12 due to financial pressures, but then in March 2012, they were able to raise $2 million. Later, Intrexion, put up $1/2 million in bridge financing and offered to buy the company. Ron Stotish joined the company in 2006 and became CEO in 2008.

Allergic reactions. Will they be any different from wild salmon? Did you know that FDA classifies GE animals, like the GE salmon, as an “animal drug.” According to the FDA, the engineered genetic code in the salmon is thus a “drug.”  How creative is that?

Will it taste the same and have the same texture as wild caught salmon?

The GE salmon eggs will be produced on Prince Edward Island, Canada, and then flown to a guarded facility in Panama to be grown to market size and butchered.  From Panama, the fish would be shipped by truck to American dinner tables. The question becomes, how long before other facilities are approved inside the US.  Just like the California Coastal Commission created in the ’70’s to allow public access to beaches, once that door was cracked open, now the CCC wields too much power and authority with a multi-million budget affecting almost every aspect of what goes on along the California coast.

The unknown. Is there anything about the GE salmon that is not disclosed? Any trade secrets, trademark secrets or patent secrets? Prior to joining AquaBounty, Dr. Stotish was Executive Vice President for R&D at MetaMorphix, Inc. He has served as Vice President for Pharmaceutical Research and Development at Fort Dodge Animal Health, and held a variety of positions at American Cyanamid. He began his career in research at Merck. Dr. Stotish has degrees in biochemistry and over 40 years experience in the discovery, development, and commercialization of new animal health products.

It may not be labeled, so once again the American public may not know what they’re eating or how it’s affecting them.

Are there any trade secrets that are not being disclosed?