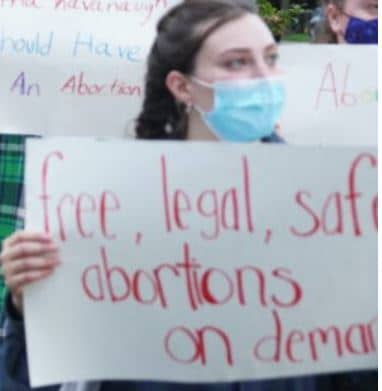 HA! If I had a nickel for every time the government lied to us, I could help reduce the national debt.

While I agree that abortions should continue to be legal in cases of rape, incest or to save the life of the mother; on the other hand charging doctors, nurses and prospective mothers with murder seems very appropriate when they want to end the life of a baby just prior to or just after birth.

Presumably for the majority of women engaging in sex, some type of sex education has taken place so they can’t claim ignorance about how they got pregnant.

And, rape (1%), incest (.5%) and saving the life of the mother… these percentages are about the same percentages over the last 49 years. No one any place anywhere can say that having 60 million abortion is much more than brainwashing women into believing that life is no longer sacred, holy and precious. Throwing away fetuses has become so common place, that even when we learned that Planned Parenthood was selling body parts, hardly a scream was heard.

Just saw a post on FaceBook that fetus body parts have been used in commercial products as flavor enhancers.:

I have my doubts that this is going actually going on. I’ve looked up HEK 293 and watched a video at this link on YouTube: can-a-baby – family fetus food – alexander backman anthony j hilder. But when researching the company called Senomyx, it was sold to a Swiss company in 2018. They were developing food additives. I just hope they were not using fetus cells. It all sounds so creepy, and sounds like cannibalism reminiscent of a movie made years ago called Soylent Green.

Whoever came up with MY BODY, MY CHOICE, in my opinion, ought to be slapped upside the head.

There are TWO BODIES.

The only time MY BODY, MY CHOICE made a lick of sense was in whether or not to take the experimental “vaccine” for Covid.

I’m not saying every single woman/girls who had an abortion over the last 49 years is spoiled rotten or taking no responsibility. Many have a heavy heart about getting an abortion. Many suffer for years after the abortion.

I am saying that more often than not our current generation of women feel entitled and are selfish enough to think, “abortion = after-the-fact contraception.” No Big Deal.

Well, let me tell you entitled females something:

You want to have sex? Take precautions not to get pregnant.

You want to have an abortion? Pay for it yourself and stop sucking off the teat of government and wasting our tax dollars and do it before a heart beat is detected.

I won’t go so far as to say those having abortions would be horrible mothers. Many of them have enough children to raise as it is and with Biden’s crippling inflation, it’s only getting harder. I do understand the economics.

But to kill a perfectly good enfant at birth or after birth? Simply evil. Diabolical. If ever the devil was involved, this is it.

One thought on ““FREE, LEGAL, SAFE ABORTIONS ON DEMAND””