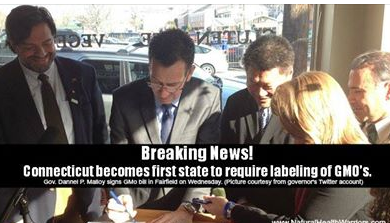 Did you know that GMO’s foodstuffs have been around commercially since 1996?

I recall being at a local Del Norte County Tea Party meeting in 2012 centered on debating the merits of GMO labeling. At that time,Prop 37 was on the chopping block since the majority’s perception in the room was:  lawsuits will result in higher food costs.

How is it that health was not the issue?  Would you rather spend money eating organic now or paying for cancer treatments or kidney dialysis later? Doesn’t it really come down to that?

A combination of northeastern states with a combined population of at least 20 million is required.  Just so you don’t have to look up a map; Connecticut is bordered by Massachusetts, Rhode Island, Pennsylvania, New York and New Jersey and they must adopt similar laws.

According to The Team at GMO Free Ct., the amended version of the bill is without the exemption for farmers grossing less than 1.5 million dollars, which undermined the entire intent of the bill.  However, there is a more reasonable trigger clause included.  The bill will go into effect when “Four states, not including this state, (Ct) enact a mandatory labeling law for genetically-engineered foods that is consistent with the provisions of this subsection, provided one such state borders Connecticut; and (2) the aggregate population of such states located in the northeast region of the United States that have enacted a mandatory labeling law for genetically-engineered foods that is consistent with this subsection exceed twenty million based on 2010 census figures.” While we believe we have a right to know what is in our food today, we are satisfied that the language of the GMO labeling bill will give CT consumers transparency in labeling that will allow them to make informed decisions once the law is triggered.

Seems like it would be a lot easier to have our Federal government make GMO labeling mandatory. Although that sounds easy remember with all the lobbyists hawking Monsanto and Dow, it’s not going to happen.  So, again, each individual State will have to enact their own legislation.

Some good news in other areas:  Hawaii’s “Big Island” City Council bans GMO’s in 6-3 vote Bill# 113, (1 exception –  papayas.) I wonder how successful it would be to try growing papayas in Crescent City in a greenhouse?

The tide is turning thanks to citizens getting engaged and demanding change.   Keep that in mind the next time someone comes knocking on your door asking if you want to sign something that could stop water rates or sewer rates from increasing.