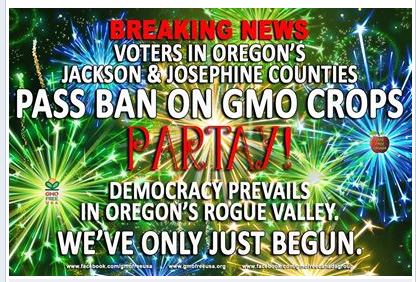 Saturday, June 20th, the Chetco Activity Center in Brookings partnered up with Mark McCoy from Therapeutic Massage,  in a free showing of the film, “GENETIC ROULETTE.”

This 85 minute documentary was made during the time California’s Proposition 37 was on the horizon.  The film made by Jeffrey M. Smith who is the author of the world’s bestselling book on GMOs, Seeds of Deception, is a leading consumer advocate promoting healthier non-GMO choices.

GMO stands for Genetically Modified Organism. What is it? Bacteria and/or virus genes that are forced into the DNA of crops like soy and corn. 80% are engineered to withstand normally deadly doses of herbicides, primarily Monsanto’s Roundup. The U.S. Food and Drug Administration does not require independent safety studies of genetically engineered foods. No long-term safety studies exist on either the safety or benefits of GMO ingredients. Matter of fact, this is a case of the fox watching the henhouse.  Who’s the fox?  Primarily Monsanto as they control 90% of the GMO seeds worldwide.

In this film, NEVER-BEFORE-SEEN EVIDENCE points to genetically engineered foods as a major contributor to rising disease rates in the US population, especially among children.  Gastrointestinal disorders, allergies, inflammatory diseases, and infertility are just some of the problems implicated in humans, pets, livestock, and lab animals that eat genetically modified soybeans and corn.

The alarming rise of autism in our children should be a wake up call to all parents. Americans get sick more often then Europeans and people in other industrial countries and we’re getting sicker. Since the mid 1990’s when Genetically Modified Organisms (Genetically Engineered Foods) when our food supply was taken over, without our knowledge or our consent. The number of Americans suffering at least three chronic illnesses nearly doubled. Why is this taking place? Why is there no government agency overlooking this travesty?

It seems so logical that if Monsanto were proud of their GMO products, they would want to label everything they have a hand in.  In contrast, they throw millions of dollars into every campaign to stop labeling and stop the people from knowing what products contain GMO’s.

According to the 2013 GMO Media Fact Sheet 91% of Americans polled want GMOs labeled, a right already enjoyed by 40% of the world’s population in 49 countries.

Exposed in Genetic Roulette are Monsanto’s strong arm tactics, the FDA’s fraudulent policies, and how the USDA ignores a growing health emergency.

Italy: The four regions Tuscany, Molise, Lazio and Marche and
around 25 provinces, cities and communes banned GE crops,
including Rome, Milan, Turin, Brescia and Genoa. These are all
democratically-taken decisions in local or regional councils and
in the case of Tuscany, the result has been ratified by the national
government – the decision means that regional governments have
been given the authority under Italian law to overturn decisions
taken at EU level.

Austria: Bans on three GE maize (Novartis, Monsanto and AgrEvo),
the Federal Institute for Less-Favoured and Mountainous Areas is
pressing for GM free legislation and published a study on GE-free
zones, initiatives in the States of Vorarlberg and Salzburg to ban GE
trials.

Spain: The Basque Government went for a five year blanket
moratorium for GMOs. The Basque Government claims full powers
for agricultural policy and thus that they can provisionally ban GMOs
if they so wish. The three provinces of Castilla-La Mancha and Baleares
banned GE food, AndalucÌa declared a five year moratorium on GE
crop trials and GE food.

UK: The Church of England has refused permission for GE crop trials
on 60,000 hectares of its land, dozens of local authorities supply GE
free school lunches, the House of Commons banned GE foods for its
catering. The vote of the Welsh Assembly to keep Wales GE free was
counteracted by the ministry of Agriculture approving a GE maize variety.
The Island of Jersey banned GE crops.

Switzerland: Although a center of GE science and industry, only two
trials with GE potatoes in 1991/92 have been performed until now.

New Zealand: Some local bodies in Auckland and Wellington have
declared themselves GM free. Trials with GE salmon have been blocked
by the government.

Thailand: Banned imports of 40 GE crops for commercial planting,
but not for research purposes.

Philippines: The community of Valencia called for a five-year
moratoria on GE food and GE crop trials and commercialization.
The Philippine president announced a moratorium on GE crop
research.

Saudi Arabia: Banned food that are made from GMOs and declared not
to import GE wheat.

Algeria: Banned the import, distribution, commercialisation and
utilization of GE plants except for research purposes.

Brazil: Planting GE seeds is prohibited by federal law in Brazil
for the time being, the States of Rio Grande do Sul and Mato Grosso
do Sul have declared their intentions to remain GM-free, 18 States
called upon the Central government to block commercial GE crop
planting.

Paraguay: The Ministry of Agriculture plans to ban GE crops from
commercial planting.

What you can do in Crescent City/Del Norte County:

Non profits can sponsor a free screening of GENETIC ROULETTE.

Sponsor an initiative to be put to the ballot to ban all GMO crops in our county.