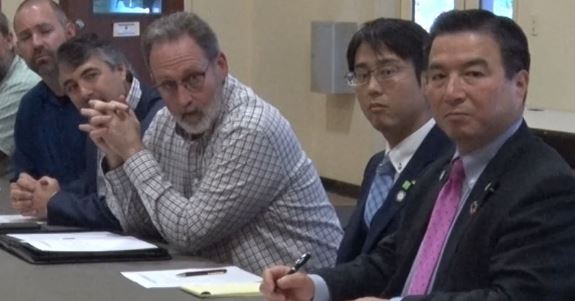 It would appear that the Howard/Inscore obsession with Japan and sister
cities has been temporarily grounded.  At a recent Board of Supervisor’s
meeting the public tax payer dodged the proverbial bullet when a request
by the newly formed “Kamome Foundation” for public money was panned.
This new group of which both Chris Howard and Blake Inscore are members,
came hat in hand asking for $2,190 of tax payer money inorder to pay the
start up costs of becoming a nonprofit.  To add insult to injury the
group’s president, Bill Stevens, claimed that the group was “built upon
the non-governmental Sister City relationship” and also wished to be
built on the back’s of the local taxpayers in a non-governmental
fashion.  This would likely give both Howard and Inscore the opportunity
for more vacations in Japan, a clear case of double dipping.

The County currently has funding in a special account which would allow
more money to be spent on “vacations” to Japan in the name of being
“educated in Emergency Preparedness”.  One blessing from Covid is that
due to the virus neither Howard or Inscore was able to take their annual
vacation to Japan.  Never fear, the Howard/Inscore cabal came up with a
ready solution, form a foundation and access the County’s special fund
that way. Apparently this skulduggery was missed on the part of
Supervisor Darrin Short as he made a motion to approve the “donation”.
Supervisor Valerie Starkey, who had the fund request removed from the
“Consent Agenda” questioned the need for tax payer dollars to fund a
foundation that could offer little back to the community. It has not
been a common feat at the Board of Supervisors for someone to actually
use their brain.  Supervisor Short clearly is lacking in that capacity,
hence his motion failed to receive a second and the “Kamome Foundation”
went away empty hat in hand.

Perhaps the best way for the taxpayers in the County to avoid further
“Japanese travel” vacations is to elect replacements for Supervisor
Howard and City Councilman Inscore.  Otherwise this is something that
refuses to die gracefully.  As Supervisor Starkey illustrated “there is
little to offer back to the community” by its continuation both in the
form of County Government and the “Kamome Foundation”.  Money from the
County treasury has supported this nonsense with the propaganda that
there were valuable lessons to be learned in “emergency preparedness” as
well as exposure at the 2020 Olympics in 2021 Japan.  This of course
would necessitate further trips to Japan by Howard and Inscore, quite
possibly for Supervisor Short as well.  He hasn’t been yet.

The Sister City boondoggle began as a benign exchange between two high
schools and has evolved into a very counter productive encroachment by
local government.  Had it remained as it began it would have provided a
exceptional cultural experience for our young people.  The fact that
local government, adults and leaders mind you, choose to usurp this
exchange has and will always be a travesty where most reasonable adults
would refrain from injecting themselves into the process.  When you
combine that abysmal behavior with monetary gain and travel at taxpayers
expense, it is well past time for change at both the County and the City.