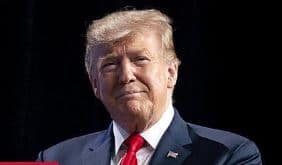 September 2021 – What we now know, before turning 18, the shooter asks his sister to buy a gun. She refuses.

Early March 2022 – On Instagram the shooter discusses in a chat room wanting to buy a gun. Then, responds to a query stating, just bought one.

11:54 am – Parents are begging officers to enter the school.

22 lives are lost; 19 children ranging in ages from 9-11 years old; beautiful children full of life, talented, some on the honor roll; 2 teachers; Irma Garcia, 48 and Eva Mireles, 44; and the shooter. Two days after the shooting, Joe Garcia, husband of Irma Garcia, died of a heart attack.

Source: Texas Department of Public Safety at a press conference on May 27, 2022

Let’s turn our attention to our current useless President Biden and how he utilized this tragedy to create more divisiveness.

Per former President Trump speaking at the National Rifle Association convention on Saturday, May 28:

“….on the horrible day of tragedy we witnessed a now-familiar parade of cynical politicians seeking to exploit the tears of sobbing families to increase their own power and take away our constitutional rights,” Trump said in utter disgust to the left’s response to the heart wrenching tragedy.

“Every time a disturbed or demented person commits such a hideous crime, there’s always a grotesque effort. by someone in our society to use the suffering of others to advance their own extreme political agenda,” he added.

“When Joe Biden blamed the gun lobby, he was talking about Americans like you,” he said to the crowd. “Along with countless other Democrats this week, he was shamefully suggesting that Republicans are somehow okay with letting school shootings happen.”

He then refers to changes that have to happen to deal with mental health. Recognizing the warning signs. “Almost all of these disfigured minds share the same profile.”

“Teachers, parents, school officials, and community members need to be recognizing and addressing these alarm bells promptly and very, very aggressively,” he said.. “And our school discipline systems, instead of making excuses and continually turning a blind eye, need to confront bad behavior head on and quickly. And clearly we need to make it far easier to confine the violent and mentally deranged into mental institutions.”

Further Trump reminded the NRA members that if we can send $40 billion to the Ukraine, we can certainly figure out what it’s going to take to keep our children safe in school. We spent trillions in Iraq and trillions in Afghanistan and got nothing. Better to spend that money in our own country building safe schools in our own country.

While Biden deepens the gulf between political parties, Trump takes the opposite approach. To deal with this scourge “… all of us must unit, Republican and Democrat in every state and at every level of government to finally harden our schools and protect our children.”

Trump made reference to the Columbine shootings of April 1999, (where two twelfth grade students murdered 12 other students and one teacher, injured 24) as the starting point for mass school shootings.

Trump told the crowd that, “…last year Biden and Democrat congressional leaders spent $122 billion in so-called Covid relief funds to K-12 schools even while they were keeping many of our schools totally shut down….. Congress should vote to take back Covid relief money, take it back from the States and quickly establish impenetrable security at every school all across our land.”

Maybe in California/Del Norte County if they returned that money, Dr. “Covid” Stutz would be out of a job at $15,000/month.

Trump didn’t know until recently about inner city schools, “Did you know that inner city schools rarely have these kinds of mass shootings. The neighborhoods have levels of high crimes and violence, but the crimes take place outside of the schools.” Trump said, “The reason is because for decades they have had much stronger security measures in place in the school itself including metal detectors and yes, armed guards, they had guns.”

He then suggested that highly trained teachers be allowed to safely and discreetly conceal carry.

Trump ended with stating the obvious, “No sign more inviting to a mass killer than a sign that declares a gun free zone.” and “The only way to stop a bad guy with a gun is a good guy with a gun.”

I say, in addition to heightened security measures at schools, bring back gun safety classes and teach the importance of the 2nd Amendment.