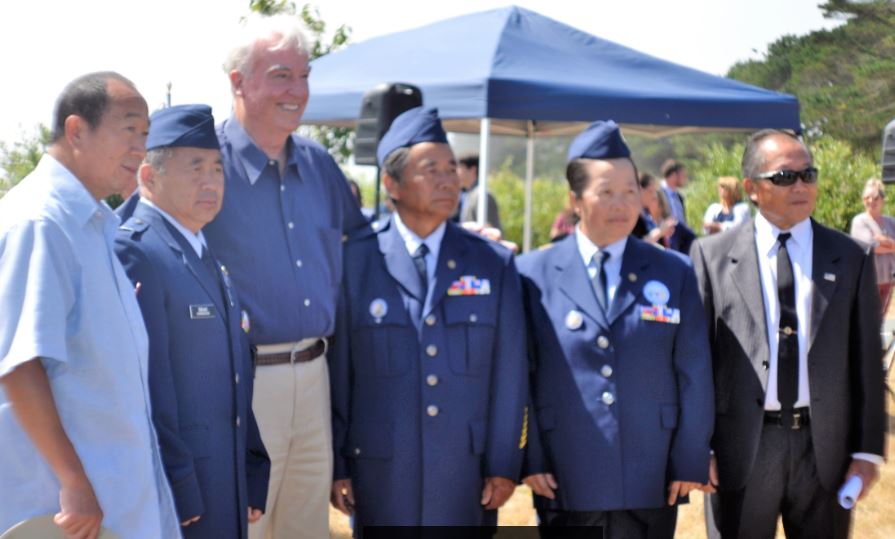 Whenever you can collect $500 in one fell swoop, it’s gotta be a good day! Gerry Hemmingsen presented Fundraising Chair, Kelly Schellong with a $500 check to add to past donations for helping the “Pont of Honor” monument get built. A gust of wind kicked the check up and off the podium, which landed on the ground and was very quickly retrieved.

While Gerry is not a vet, there was a good turn-out of veterans, City Council members, Del Norte County Supervisors, Police Chief, Ivan Minsal, and former Police Chief, Doug Plack.

Of particular interest were the Hmong veterans in uniform. This will be the first time in the State of California that the Hmong deceased veterans will be honored at a monument.  They will rest on the Air Force section.

It’s been a very long process, once stalled with the California Coastal Commission back in 2009. The project was initially gearing up for completion in 2016 and costing $1/2 million.  Thanks to donations by the Masons, Home Depot and Crescent Ace Hardware, all the building supplies have been donated for phase one.

Adam Trask, Project Manager, was not in attendance due to being released from the hospital.  Committee Chairman Harlan Zeigler gave a brief background and reminded the attendees of the sacrifices made by many good men and women from Del Norte County.

Thanks were also expressed by Ms. Schellong to Charles Slert, former Mayor and architect who donated his talents in designing the pentagram monument. The City donated the land at the “S” curve by Highway 101. Phase two should be completed before the end of summer.  The anticipated completion for the entire project is sometime in 2018.