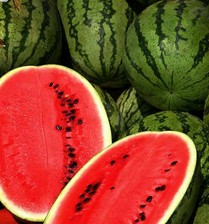 Did you know that watermelons are 90% water making them very aptly named?

Besides eating them, juicing them is a refreshing way to enjoy watermelons.

Dieting is helped by consuming watermelon since a cereal size bowl only contains 80 calories.

The National Watermelon Promotion Board (NWPB) operates with a single objective: to increase consumer demand for watermelon through promotion, research, and educational programs. The organiztion is based in Orlando Florida.  They are a non-profit formed in 1989 to benefit melon growers and shippers and importers purchasing watermelons from the United States.

You need four things to grow a watermelon:  Sun, Bees, watermelon seeds and water.  Plant seedlings in beds 8 to 12 feet apart.  Tiny watermelon plants from a transplant nursery can be implanted in the beds. Honeybees must pollinate the yellow watermelon blossom. Even the sterile, seedless watermelon requires pollination in order to fruit. In a month, a vine may spread to as much as 6-8 feet. Within 60 days, the vine produces its first watermelons. The crop is ready to harvest within 3 months.

Once the watermelon is cut from the vine, they have 3 to 4 weeks of shelf life.

Watermelon’s are closely related to cucumbers, pumpkins and squash.

One interesting fact is that the first cookbook published in the U.S. in 1776 contained a recipe for watermelon rind pickles.

Are any watermelon’s GMO (genetically modified)?  The answer is NO.

Is watermelon a fruit or a vegetable?  Take your pick.  Botanically speaking it’s a fruit because of it’s smooth exterior rind and sweet, juicy interior. But it’s grown and harvested like a vegetable similar to squash.