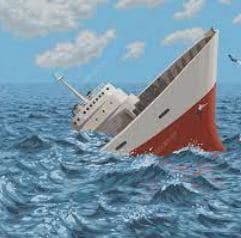 Stupidity runs rampant between 5 commissioners who do not understand their subject matter nor due their due diligence to protect taxpayer precious funds. Nothing like going to a meeting, getting paid, completely unprepared. Want to know why the Harbor is so messed up? No one conducts their due diligence.

Topic of discussion for new business was the Tri-Agency. It was  unbelievable to watch these commissioners debate about something they knew nothing about. They didn’t know who had benefited from the Tri-Agency, nor had they read one piece of documentation that pertained to the Tri-Agency.

What is the Tri-Agency? The Tri-Agency is a joint power agency  between Crescent City, Del Norte County, and the Harbor which was created in 1976 through the USDA Rural Development and Rural Business Development. The Tri -Agency received a $2,609,590.00 award under investment #07-19-01782.

The reason why the Tri-Agency transferred their award is because they had defaulted for several months. After transferring their award to Del Norte Economic Corporation, that corporation lost their employees, and were not holding up to standards of a running operation according to federal law, and is currently under investigation for their misgivings.

April 9, 2018 the Tri-Agency disbanded. However, Chris Howard, Darrin Short, Blake Inscore, Jason Greenough, Wes White and Brian Stone continued the Tri-Agency as though nothing happened. In Fact somehow which has not been clear, the Tri-Agency owed  funds in the amount of $263,000.00 and which are owed to the USDA. $288,000.00 is actually owed which includes interest charges.

These 6 men decided to go after the businesses that owed the money to USDA but had defaulted. In a letter dated October 6, 2020 from the Tri-Agency to the California State Director of USDA Rural Development and Rural Business  cooperative service,  Harbor Commissioner Wes White attempts to tell his sad sop story to USDA when he fails to realize those on the Tri-agency are at complete fault.

In 1997 the Tri-Agency entered into a contract with USDA for intermediary relending program. This was a 30 year program totaling $400,000.00. It was a program that provided low interest loans  to high risk small businesses. This program failed, because this program was run by ordinary people who had no idea how to process loans or monitor them. By 2011 the Tri-Agency was not able to make it’s payment to USDA and the loans had defaulted. The Tri-Agency failed to pursue the defaulted loans. The Tri-Agency continued to dig a hole which would affect the entire community. In 2012, a letter from Ms. Treptow stated the Tri-Agency was working on getting dissolved. After 2012 a lot of documentation was conveniently lost and never found. 6 years pass without communication from anyone.

Fast forward to April 9, 2018. The Tri-Agency dissolved according to the U.S. Department of Commerce. In the meantime, The County hired the Mitchell Law Firm out of Eureka to go after Lori Cowan who owed the Tri-Agency $115,706.00.  And in 2020, The Tri-Agency received two checks from the Cowans totaling $115,706.00.

The Tri-Agency whose address is the County Building belonging to the Board of Supervisors office received the money from the Cowan’s and placed the money at Coast Central, where only the Tri-Agency members have access and oversight of this money. Remember somehow County Board of Supervisors Darrin Short and Chris Howard believe that members of the public who received no benefit from this money should pay back these defaulted loans created by the following businesses. The amount on our backs is $288,000.00 plus.

Bistro Garden who owed thousands of dollars to the Tri-Agency did not hold them accountable due to a death in the family. The Harbor owned the building at that time and released the owner from what he owed and the Tri Agency kept the fixtures and had the owner vacate the building. This demonstrates the Tri-Agency was inept in running a loan agency.

The Ambrosia Grill to which Tri-Agency issued several loans, amount was not disclosed, declared Bankruptcy in 2010 the Tri-Agency was only able to get $25,000.00 worth of fixtures, and the remaining $42,000.00 was discharged.

Plaza Imports owed Tri-Agency $14,000.00 and due to the fact Tri-Agency was not adequately or properly staffed, statute of limitations ran out for them to get the $14,000.00 back. That was caused by the 6 board members of the Tri Agency who gave out money and never held anyone accountable.

The Surf Side Grill failed and that building was foreclosed on. The Tri-Agency came away with $37,100.00. However, at that time the Tri-Agency was unable to locate the documentation necessary to foreclose on the residence which required to obtain an attorney to receive a settlement of $115,706.00. (Cowans). This is a questionable act since the Tri-Agency was dissolved by 2018 and then in 2020 obtained the $115,706.00 placed it in the Coast Central, when they didn’t even have a Tri-Agency. Is that Fraud?

WHY DOES TRI_AGENCY WANT TO MAKE THEIR CONSTITUENTS PAY?

Plain and simple so that Chris Howard, Darrin Short, Blake Inscore, Jason Greenough, Wes White, and Brian Stone can continue to use money for frivolous loans with the newest idea of placing a Windmill farm out in the ocean that has no ability to hook up to anything once the cable gets to shore. We do not have the infrastructure, the money, or a facility designed to hold the amount of power produced by the wind farms.

The Tri -Agency board members Darrin Short and Chris Howard attempted to sway the vote of the Board of Supervisors to give up $70,000.00 of taxpayer funds (more than likely measure R since measure R is in the general fund) to pay for a debt created by them through the Tri-Agency that has proven to fail 50 years. The Board of Supervisors to this date has not been swayed, however, the ignorance of the Harbor Commission and their lack of due diligence and knowledge voted to preserve $5,000.00 for their cost not knowing or understanding public money is not their money it is public.

The Harbor Commission has not read one piece of documentation nor educated themselves whatsoever. And although they were presented with several documents to demonstrate the Tri-Agency disaster, they only listened to Kevin Hendrick who brought a single piece of paper and said, “This is what you need to pay.”

The ignorance and watching them make decisions for this community as they lead everyone off a cliff is devastating. Harbor Commissions: Rick Shepard, President, Harry Adams, Secretary of the Board, Wes White, Brian Stone and Gerhard Weber. Vote 5-0.

Maybe it is time to think about repealing their TOT tax next.