Have you noticed the spike in costs in Del Norte County? 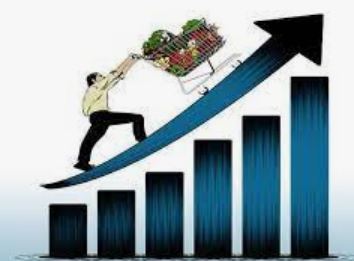 How could you not notice?

Rampant inflation, after years of successfully holding down the helium of of high costs, the full wrath of your devalued dollar is now upon us.

Is inflation here to stay?

It is now unavoidable!!! California projects a mean average of 2.5% inflation rate each year to 2024. This means your dollar is worth 97.5% of it value ( and declining buying power), each year.

What’s causing the evaporation of our currency’s buying power?

2) Increasing the National Debt to $28.4 trillion with as much as $6 trillion MORE debt projected during the Biden Administration will only exacerbate the inflation. To those of you who received stimulus checks, I am certain you have learned how little $1200 buys.

The United States of America cannot sustain this economic Armegedon. American is heading toward hyperinflation, a perennial disaster throughout Latin America. After WWI, Wiemer-Germany collapsed when it attempted to print it’s way to economic prosperity and pay back the $19 Billion Treaty of Versailles debt it incurred after losing the War. Germany’s currency, almost overnight became worthless, paving the way for Hitler’s Third Reich.

The cure for hyper-inflation is simple:

Sadly, I observe the recent 14% increase in General Sales Tax in both Crescent City and Del Norte will be evaporated by the ravages of inflation fueled by an out of control Sacramento and a misguided Washington. Simply stated, our local governments will not have the $$ it needs to do the things Measures S and R promised.

From haircuts, pedicures, beauty parlor visits, groceries, lumber and just about anything we buy, the prices have shot way up. In April alone, prices exploded 4.2% in California, according to the Consumer Price Index. The least expensive gasoline in Del Norte County is $4.27 a gallon. Curry County continues to attract lots of Del Norters with $3.25 per gallon at Fred Meyer. Is it no wonder we Californian’s cross the border to buy items.

All of us can heed this advice and wean our way off onerous government control.

One thought on “Have you noticed the spike in costs in Del Norte County?”