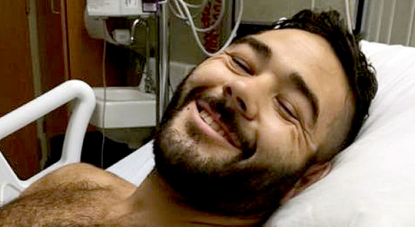 It was his first week in college after 10 years in the Army.  When the shooting started, he ran to the door and tried to block the shooter from coming in and shooting any more people. He pleaded with his assailant, “It’s my son’s birthday.”

Umpqua Community College in Roseburg, Oregon was lucky to have 30 year old Chris Mintz as a student. He was a former high school football player and a US Army veteran.  For his efforts, Chris was shot seven times, had both legs broken and spent the day in surgery.  His prognosis looks good, but a gofundme page has been set-up to help with his medical bills and care of his six year old son.

During the shooting, Chris ran to the library and pulled alarms telling people they have to go. Then he ran back to the building where the shooting was taking place.

A former security guard at the college revealed on Alex Jones’ InfoWars “The college voted against hiring armed security guards just last year and that inadequate lockdown procedures ensured the campus was a “deathtrap” for potential victims in an active shooter situation.”

It will be interesting to watch the college to see if they alter their “No Gun Zone” policy.   Located in a remote area of Roseburg, it took Sheriff’s Deputies time to reach the campus. Roseburg is about 180 miles south of Portland, Oregon. Oregon is one of seven states that allow conceal carry on campuses on public  public postsecondary campuses.