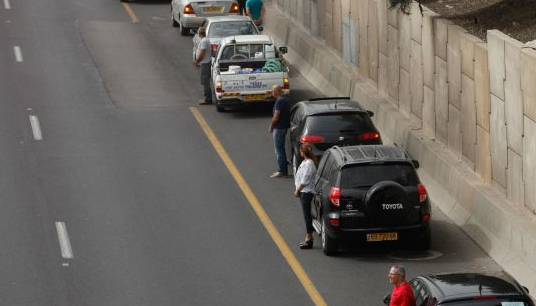 The systematic destruction of Jewish life in Europe by German Nazis is remembered in Israel on the 27th of April. In a rare acknowledgment by an Arab leader of Jewish suffering during the Nazi genocide, Palestinian President Mahmoud Abbas on Sunday called the Holocaust “the most heinous crime” of modern history and expressed his sympathy for the victims.

In Israel, the Jewish state came to a virtual stop as the two-minute siren went off on Monday morning, marking Israel’s Holocaust remembrance day — one of the most solemn days on the Israeli calendar.

Buses and cars stopped on roads and highways. Many people stepped out of their vehicles and stood in solemn silence. Pedestrians stopped walking and stood still in contemplation.

Israel’s annual memorial day for the 6 million Jews killed in the Holocaust has begun with a ceremony marking 70 years since the Warsaw ghetto uprising.  Before WWII, 500,000 Jews lived in the Warsaw ghetto, the second largest Jewish population after New York.

Children in America don’t realize how precious their freedoms are.  In a quick glance at how quickly those freedoms can be eroded, here’s a brief outline prior to the outbreak of WWI.

January 30, 1933: President Hindenburg appoints Adolf Hitler Chancellor of Germany.  At this time, there are 566,000 Jews in Germany.

February 28, 1933 – Emergency powers granted to Hitler as a result of the Reichstag fire.

March 22, 1933 – Nazis open Dachau concentration camp near Munich, to be followed by Buchenwald near Weimar in central Germany, Sachsenhausen near Berlin in northern Germany, and Ravensbrück for women.

April 1, 1933: Boycott of Jewish-owned shops and businesses in Germany.

Thus began one of the most brutal practices of genocide committed upon this earth.

By 1938 German Weapons Act declared that Jews were prohibited from possessing any dangerous weapons, including firearms. They were also forbidden from the manufacturing or dealing of firearms and ammunition.

Country after county fell like dominos.  Thousands upon thousands of Jews were murdered in each country.  Millions sent to the gas chambers.

The systematic destruction of the Jewish race and millions of others from 1933 until 1945 didn’t happen overnight.  It happened progressively. It happened legally.  The people allowed it and didn’t stand up and say, “THIS IS WRONG!”

Many that did speak out were killed.

Those smart enough to realize the danger of their situation were lucky enough to get out of Europe and make their homes in places like North America and South America.

13 million people, men and women and children died during the years 1933 through 1945. 6 million were Jews.  How did it happen?  By putting out enough propaganda to turn good, decent people into goose stepping zombies. That’s why it’s so important to learn to think.  To learn right from wrong.  And to fight any government that wants to erode our freedoms.

What happened to the masterminds of the “final solution.”

Moral of this story.  When good people cower because of fear, because of retaliation, because they might lose their jobs or be black balled or black listed the likes of what is happening in our own small community in Crescent City/ Del Norte County then they have no one to blame except themselves for the bad government and the bad legal system they put up with.