HOW BAD IS HFSA/FLUORIDE IN THE WATER PIPES? 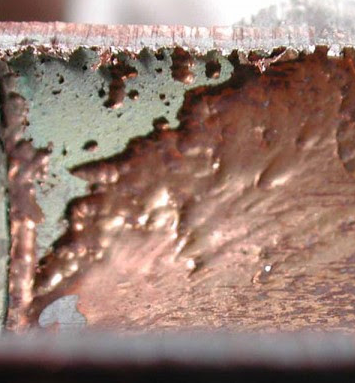 On November 4, 2013, former Councilwoman Donna Westfall reminded the City Council members of Crescent City that they were told over the prior years that hydrofluorosilicic acid (HFSA)/fluoride flowing through the water pipes was something that needed to be investigated.   HFSA/fluoride is corrosive.  It only makes sense that having something that corrosive could harm humans and pipes.

Now, Dr. Rowen, in Sonoma County, has put pen to paper and explained why the corrosion factor of HFSA is harmful:

“The fluoride debate is boiling in Sonoma County. Those drinking its water should know about some startling fluoride revelations. Recent research has connected “hidden” dots linking fluoride with the most dread of all diseases – Alzheimer’s (AD). It may not be fluoride directly, but fluoride’s effects on your copper pipes.

Copper in your body exists as either organic copper or metallic copper. Organic copper is properly protein-shielded from causing damage. Metallic, or free copper ions like free iron, can wreak havoc. Let me connect some dots for you:

3) Japan is an AD anomaly in the developed world. It has quite a low incidence. Interestingly, Japan neither fluoridates its water, nor are copper pipes widespread. Japan uses stainless steel. Undeveloped countries don’t use copper pipes (too expensive) and also have far lower rates of AD.

5) Zinc is copper’s natural antagonist. Zinc has protected cognitive decline in both animal and human studies. Chlorination is required for safety of drinking water. However chlorine compounds alone corrode lead containing brass, and will increase lead concentrations from 100 ppb to 200 ppb in drinking water.  A 2005 California symposium pointed to copper pipe failure caused by the use of chloramines used in California water systems to extend the disinfecting power of chlorine.  Chloramines aggressively leach copper and other metals from whatever it touches.

So how does fluoride fit in? Tacoma had to close down fluoridation in its system in 1992. Fluoridated water had eaten away metallic copper from its pipes, exposing lead in fittings. Lead levels soared. When fluoridation was stopped, lead fell, only to rise again when fluoride was restarted. Fluorsilicic acid caused lead levels to spike to over 900 ppb. Fluoride’s addition creates ammonium fluosilicate, an established solvent for metallic copper alloys. Other cities have documented clear dangerous lead drinking water elevations after fluoridation began (Lebanon, OR, NYC, Thurmont MD).”

HFSA’s corrosive properties are well known yet ignored by the industry propaganda. The warning label on the product screams CORROSIVE! Yet in the past this was never taken into account when proponents for fluoridation did their screaming about preventing tooth decay. While fluoride’s tooth decay prevention is widely disputed, the corrosive action of HFSA is not. With our water system in financial disarray, it makes one wonder how much of our pipe replacement is due to the corrosive action of the additive HFSA. It only makes sense that when you put a highly corrosive agent into the system to run through the pipes/fittings that the pipes/fittings will be affected. How much money has been squandered repairing and replacing pipes/fittings from our 44 years of fluoridation? Just another hidden cost of fluoridation aside from the physical toll it has taken on water users for decades.

Our local fluoridation promoters refuse to look at all the research and instead rely on the financially invested “experts” like the CDC (Centers for Disease Control) for information on the safety of fluoridation. The agencies promoting fluoridation are involved in a web of deceit against the public in order to maintain their cash cow. It is always best to rely on external research from those with nothing to gain by either the continuation or discontinuation of municipal fluoridation, which most of our local leadership refuse to do. I personally expect larger thinking on such important matters and our current city council has fallen short by continuing to espouse the industry propaganda. The studies of harm exist and are relevant, too bad our council lacks the research skills to dig out this information and the critical thinking needed to apply it.

3 thoughts on “HOW BAD IS HFSA/FLUORIDE IN THE WATER PIPES?”