HOW HOT CAN YOU GO? 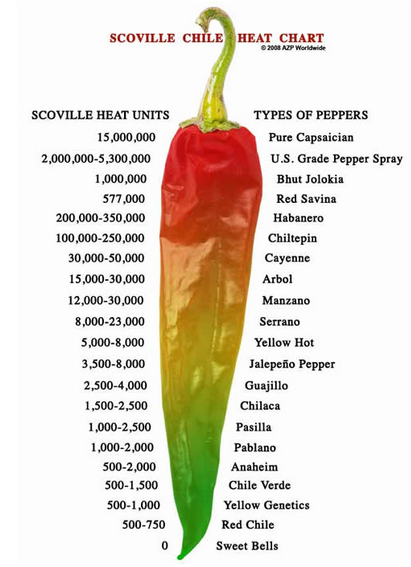 Did you know there’s actually a way to measure how spicy and hot food is?  It’s called the Scoville Scale after American Pharmacist, Wilbur Scoville. Established in 1912, he ranks the hotness of chili peppers from sweet bell peppers to pure capsaician.

How did he figure this out?

A solution of a pepper extract is diluted in sugar syrup until the heat is no longer detectable to a group of testers.

Capsaicin is a chemical compound that stimulates chemical receptor nerve endings in the skin.  What’s the shortfall of the Scoville test?  It relies on human perception which is subjective.  While some can tolerate Serrano or Jalepeno chilis at their upper limit comfort zone; there are those that prefer the hotter Habenero.

Today, pepper and spice heat is now measured by a more scientific method known as High Performance Liquid Chromatography or HPLC. A mathematical formula is then applied to weigh peppers by their ability to create a sensation of heat. This method does not use Scoville Heat Units (SHU) but measures something called ASTA Pungency Units. In this process, one part of capsaicin per million translates to 15 Scoville units. And, this system says that ASTA Pungency Units can be multiplied by 15 to be reported as Scoville units. Yet, this conversion is approximate. Leading spice and pepper experts say there is consensus that the ASTA units results in 20–40% lower heat than the Scoville method provides.