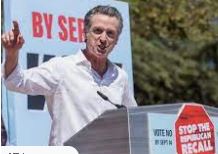 hat Gavin Newsom cheated in the Recall is not in dispute. He did so openly and his allies admitted it. I said so directly in a June 28 speech on the Assembly Floor.

Newsom changed the laws for his own Recall right before the vote. He moved the election date in the manner of a banana republic. He instituted all-mail ballots. He bombarded us with ads even the mainstream media called lies. His Secretary of State illegally tried to exclude candidates.

He also sent $600 checks from the government to voters, then asked them to return the money to his campaign. He used unlimited campaign contributions to call in $70 million from Special Interests.

The good news: all of this will be harder in 2022. And while the Recall vote was for a one-year truncated term, next year’s Governor election is for a full four-year term.

If voters are given a clear sense of just how corrupt our Capitol is, it can be a wave election. For instance, PG&E has just been charged with 11 more felonies – after giving Newsom $700,000 and receiving special treatment in return.

Our state needs leaders of integrity who will reject this culture of corruption. Because I still believe California is worth fighting for.

One thought on “How Newsom Cheated”