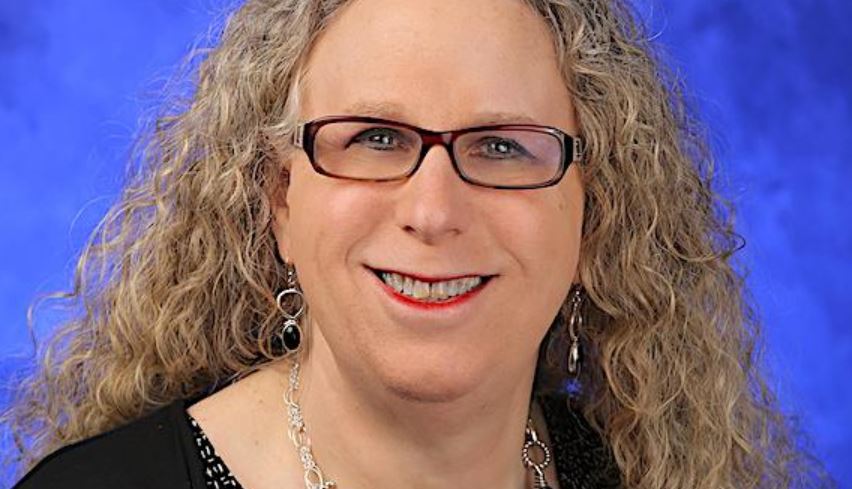 Meet Jack, a 27 year old two-time loser ex-con who was recently released from San Quentin Prison because of Covid-19 overcrowding.  Last month, after hearing about HR-5, Jack decided that his true sexual identity and gender are female. Under the regulations of HR-5, no doctor or psychiatric examinations or certifications are necessary for Jack to “Identify” as a woman; he simply needs to pursue his freedom of gender identity. Jack need not pursue sexual reassignment, take any transitional medications, nor even be required to cross-dress in women’s clothing. Jack need only claim the gender identification that “feels right” for him.

Jack has chosen to be, not only a woman, but a lesbian. Jack has all of the equipment of a man, and the same sexual drives of a man, dresses like a man, and even adopts the salty speech of a man, but claims to identify as a woman. Can Jack help it if he is a “Tom-Boy?”

Jack can now participate in women’s sports, and shower with them after the games. No fault can be assigned to Jack if he get’s an erection in the showers; because he identifies as a lesbian. Can Jack help it if his anatomy is more obvious when aroused than Jack’s biologically female lesbian counterpart?  To assign blame on Jack would be discrimination!

Jack will be allowed in the same restrooms and showers that your wife and daughter use. Jack can use the same changing rooms at the beach as any other woman. Jack must be afforded full and equal rights to interview and possibly become your Church School girl’s cheer-leading coach. There will be no religious exemption from HR-5!

Jack’s intrusion into feminine exclusivity is nothing to be concerned about.  Any male-drive to protect your wife and daughter are throw-backs to patriarchal white-supremacy; which is pure evil.  Such thinking has no more place in this modern Woke world than Hasbro’s now defunct Mr. Potato Head. You are now simply re-branded as a gender neutral “Potato Head.”

Perhaps Jack might even become a member of the new mandated LGBTQ support services team at your local public school. As your pre-schooler’s choose the gender that “feels right” for them, Jack can coach them along their way to puberty. Maybe, when they reach puberty (between 10 and 16 years of age), the school nurse and psychologist might provide your child with referrals to a doctor for sexual reassignment medications or surgery. Any cruel xenophobic parent who would interfere with a pubescent child’s gender decision is not fit to be a parent. In such a case, the child would be removed from such a home by the courts and placed under foster care. Perhaps they could be placed under the care of a special LGBTQ group-home tailored to their specific needs, like the one run by Jack and his lesbian lover Jose. Jose is an MS-13 human trafficker and drug smuggler who was recently released from ICE detention and is receiving Social Security due to his Medicaid diagnosed heroin addiction disability.

HR-5 The LGBTQ Equality Act was passed by Congress on February 26th, 2021 and is now headed to the Senate.

For decades, the American Psychiatric Association’s Diagnostic and Statistical Manual of Mental Disorders (DSM) categorized sexual identities that deviate from the norm (deviant or abnormal) as “Sexual and Gender Disorders.” However the latest version (DSM-5 302.85) now categorizes it as “Gender Dysphoria” in an effort to “prevent stigma.” The only question is how many other mental disorders will be awarded unlimited “Equality?” Other Mental Disorders in the DSM include Tourette’s Syndrome, Panic Disorder, Multiple Personality Disorder, Narcolepsy, and Kleptomania, to name just a few. Would a person with Tourette’s Syndrome, prone to uncontrollable bursts of foul language, be a good fit to work as a church preacher? Would a person with Panic Disorder, who can easily slip into a full-blown panic attack, make a good air traffic controller? Should a person with Multiple Personality Disorder, prone to sudden unmanageable shifts of conscious identity, be offered a position as brain surgeon? Should a Narcoleptic, inclined to fall dead asleep at any moment, work as an airline pilot? Will Kleptomaniacs, with an uncontrollable urge to steal, be managing banks?

Of course, we should all applaud our federal legislators for supporting the LGBTQ Equality Act. Mental disorders are important for any free society to not only admire; but set as a new standard for normality. It only makes sense to force an entire society to adapt their use of reasoning, legal priority and language to pander to each and every Mental Disorder in the DSM. HR-5 represents just a small exciting part of what is in our future under total Democrat rule!