“If it weren’t for hypocrisy, Democrats would have no standards at all”. 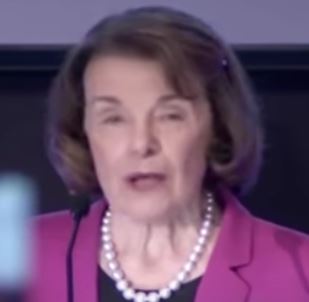 To my 88 year old Senator Dianne Feinstein via Facebook about Newsom today’s date:

California is going down the tubes. Please, before you leave office, work towards getting that idiot Newsom out. From failed public education, to the “hi speed rail” another billion over budget, to homeless vets, to mandates for mask/vax which make no sense any longer, to his State of Emergency, droughts with no proper steps taken to see that the water doesn’t just go into the ocean…… on and on and on. Be a mensch. Do the right thing and forget for a while you’re a Dem. Put our state and your constituents first before party politics. Turn this train wreck around!

To my 88 year old Senator – Put up on Facebook about articles of impeachment for treason against Biden today’s date:

After seeing the disaster Biden is responsible for in Afghanistan including leaving our military armaments, there is no way I can think this was not done on purpose and as such Biden should be brought up on treason charges for giving aid and comfort to the enemy.  But let’s say for the sake of argument that it wasn’t done on purpose.  Why would ANYONE in our country want an incompetent like Biden to continue to “run” this country?

Biden must not know much about history.  All he has to do is look at Venezuela.  Is that his role model?  Does he really want to see Socialism and Communism in our Country? He has devastated this country from the first day in office. We are on the brink of disaster and we cannot afford to have him in office any longer.  AS ONE OF MY ELECTED REPS, PLEASE DO WHATEVER YOU CAN TO GET THIS IDIOT OUT OF THE WHITE HOUSE!  Stop playing party politics and do your job to uphold the Constitution and Bill of Rights.  You remember those, don’t  you?

“A woman’s right to choose to have an abortion has been settled law for nearly 50 years. The Supreme Court upheld that right repeatedly until it allowed a recent Texas abortion ban to stand. The court is now set to rule on a similar Mississippi law.

The Mississippi law, like the Texas ban, is a blatant attempt by a Republican legislature to undermine the constitutional right to abortion care. I joined my colleagues in filing an amicus brief in this case urging the court to follow precedent and protect women’s right to choose.”

A few comments by her constituents about this subject and the vax and more:

Feinstein has this on her FB page, “As California’s senior Senator, Dianne Feinstein has built a reputation as an independent voice, working with both Democrats and Republicans to find common-sense solutions to the problems facing California and the Nation.”

An independent voice? I think not. I really should ask her for a list of common-sense solutions to problems she has come up with in the last 5 years. I maintain her reputation is soiled.