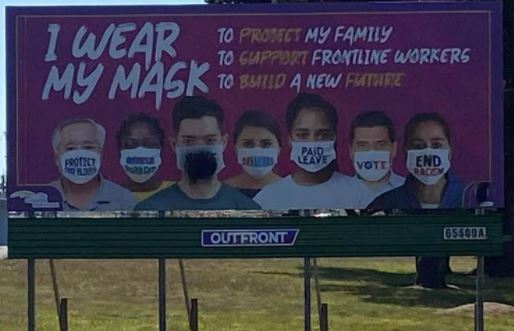 Recently, The California Endowment paid to have 2 large billboards erected in our town. Hundreds of people protested primarily to Supervisor Roger Gitlin because the signs contained pictures of various people wearing masks with messages on them like Black Lives Matter (BLM) and Stop Racism. Someone defaced the sign, no one knows who; by blacking out Black Lives Matter. Days later, someone else stenciled a fist over the blacked out portion. The sign had served it’s purpose. Divisiveness. It seems to me that if they were really intent on ending racism, they would tout, ALL LIVES MATTER!

Letters between Roger Gitlin and Dr. Robert K. Ross, CEO of the California Endowment were exchanged.

Then after reading Dr. Ross’s response to Roger Gitlin, Linda Sutter sent her own letter to Dr. Ross.

After reading your response to Roger Gitlin of Crescent City California I was laughably enlightened by your misinformation.

“Native American tribal members in Del Norte STILL remember massacres inflicted on them by settlers sponsored by state leaders; just like they will remember armed conflict with State and Federal Troopers over rights to fish in the 1970’s. Today, in Del NOrte County, we know that black and native people have disproportionately high rates of incarceration and have lower graduation rates.”

Very interesting remarks coming from someone who has never been here nor do you know what goes on here. Pelican Bay State Prison(PBSP) resides here, and although primarily filled with blacks, they were not convicted here. There are approximately 20 blacks if even that in this whole community, and they were brought here by their employment at PBSP.

Secondly, the natives that reside here are very troublesome. The leadership within the Yurok tribal council (James Dunlap) was forced to step down because it was at first overlooked by the local natives that he had been formerly convicted of killing his 3 month old daughter. The current politics within the tribe fired one of their own tribal attorney’s  for reporting child molestation against someone sitting on the council, or related to someone who sat on the council. How does this encourage a healthy community?

Alcoholism and drugs are prevalent in this community of natives. Their children suffer from the inevitable and grow up and become a product of their own environment. This culture is protected from state law, regardless if murder, child and spousal abuse are committed. In regards to Margaret Keeting School, the problem that lies there, is the parents don’t believe their children need to attend school regularly because of their own customs. This affects the disproportionate  ability to graduate successfully from high school much less college. So who is to blame? White people?

Although you think you are doing a great job in helping these communities, quite frankly, you are part of the problem. How is that you ask? You sit behind a desk, without conducting your own research, relying on hearsay, and form an opinion based on no actual knowledge whatsoever.

Recently your organization placed two signs up that caused division within the community. Why? How does that promote healthy communities? How are children supposed to adjust to Marxist ideologies that are not supported by the United States laws, policies, and procedures? How do these signs fix disproportionate educational values? How do these signs that discuss BLM which promotes racism in itself promote healthy communities? Your sign, which is supposed to advertise to wear a mask, took a turn for the worse. The signs demonstrate a complete disregard to the United States of America and the foundations to which it was built. It does not meet the criteria of promoting healthy communities but demonstrates to continually fight among one another over political rants.

Your smug position towards Roger Gitlin demonstrates your actual lack of knowledge of what is going on here and bases your opinion upon hearsay instead of your own research. Pitiful. Tell us all again about freedom of speech when that freedom causes hate and discontent.

3 thoughts on “Is the California Endowment really building healthy communities?”