IS THE CITY GUILTY OF BLACKMAILING THE PUBLIC? 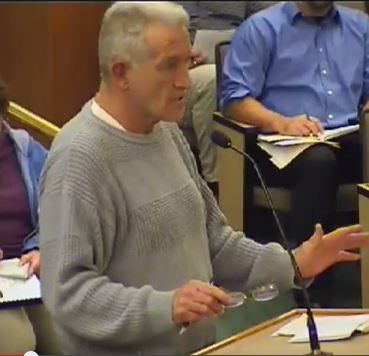 After listening to presentations by Public Works Director, Eric Wier, and Interim Finance Director, Susan Mayer (at $9,000+/month) on the need to increase our water rates; County Resident John Stetson approached the podium to share his public comment and anger at an inept city council and bureaucratic hogwash.

“HOW DARE THE TWO OF YOU TALK ABOUT BLACKMAILING THE TAXPAYERS…. THAT’S NOT APPROPRIATE… FOR ANY GOVERNMENT OFFICIAL  TO SAY IF YOU DON’T GIVE US MORE MONEY, WE’RE GOING TO CUT YOUR SERVICE.  HOW ABOUT CUTTING EXPENSES?  I DIDN’T SEE ANY PLACE IN THIS WHOLE 58 -68 PAGE REPORT, I DIDN’T SEE THEM TALK ABOUT ANY EXPENSE CUTS ANYWHERE…IN ANY OPERATION.  ALSO THERE IS NOT OBVIOUSLY ANY PRIORITIZATION.”

In typical Crescent City, City Council style, the only cuts discussed were NOT by any of the council members.  These members lack critical thinking.  Only members of the public brought up the need for the council/City to cut their expenses before asking the public to make further concessions from their budget.  The last sewer rate increase went into effect May 1st of this year.  That added over $5/month to every sewer user in the City and County.

Now they’re talking another $5-6/month with this water rate increase starting December 5th (higher in the Bertsch-Oceanview Tract).  It doesn’t stop there.  Within 19 months it increases the rates 100%.

Taking a further jab at Mayer, Stetson continued, “WHY DOES THE TAXPAYER AND EVERYBODY WHO’S A RATEPAYER HAVE TO CUT EXCEPT THE CITY?  YOU KNOW WHY? BECAUSE OF A BUREAUCRATIC APPROACH LIKE THIS THAT SAYS WHAT WE WANT WE CALL A NEED.

SHE (Mayer) JUST DISPLAYED A CHART THAT DISPROVES WHAT SHE TOLD YOU.  THIS IS NOT A MATTER OF LOST REVENUE.  THE REVENUE HAS BEEN CONSTANT…. JUST UNDER $1.5 MILLION/YEAR.  IT’S THE EXPENDITURES THAT HAVE EXCEEDED THAT $1.5 MILLION BY MORE THAN $1/4 MILLION/YEAR FOR 3 YEARS.  THAT’S THE PROBLEM.  THERE’S NOTHING IN WHAT YOU PRESENTED THAT SOLVES THAT PROBLEM.  THERE’S NOTHING THAT THE TAXPAYERS CAN DO IN GIVING YOU MORE MONEY THAT SOLVES THAT PROBLEM.”

Stetson suggested working together. Coming up with programs that would allow the impoverished to keep their current rates if they don’t exceed the minimum usage.  You can watch the video here: http://www.youtube.com/watch?v=_uu5iI00VTg#t=2526

Going into Day 4 of the protest count tabulation, the public is anxiously awaiting a verdict.  Will the water rate protest succeed and stop the increase?  Will the City roll over the public once again?  Will those who didn’t sign be right because they contend this crooked City will do whatever they want and get away with it?

Cora Jones will become Observer #2 filling the 8:30 to noon slot.  Eileen Cooper will take over for Cora as Observer #2 in the 1 to 5 pm slot.  John Stetson will continue as Observer #1 for his 4th day in a row.