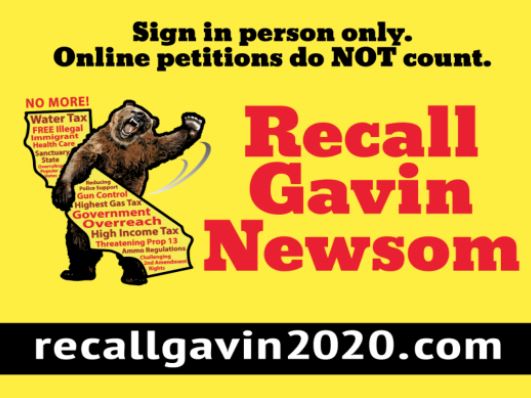 As a way to start the new year, residents of Del Norte County are going to be putting up lawn signs that read Recall Gavin Newsom.

After so many recall attempts against Newsom, who is behind this one? It’s by retired Yolo County Deputy Sheriff Orrin Heatlie and 124 others. Recalls have to be approved for circulation by the Secretary of State (SOS) and 47 year old Alejandro “Alex” Padilla has been the California SOS since 2015 and approved the paperwork on June 10, 2020. Note: Gov. Newsom has appointed Padilla to the Senate to replace Kamala Harris. (See article: Don’t Seat Newsom’s appointee: Alex Padilla published today’s date.)

Recalls have 160 days and have to be circulated in five counties to obtain the necessary signatures in order to go to the next step. For this recall to be successful, nearly 1.5 million valid signatures of registered voters are needed. Because of the Covid 19 pandemic, Superior Court Judge James P. Arguelles extended the signature deadline for the recall from November 17, 2020, to March 17, 2021.

Until this year, Newsom was the highest paid governor in the country at over $200,000 a year with an $8,000 increase that went into effect this December while New York’s Governor Cuomo knocked him out of 1st position at $225,000.

Granted California has been dominated and controlled by the Democratic Party for decades. However, Trump garnered almost 6 million votes in 2020 and 4.5 million in 2016. That’s more than any Republican candidate has ever received. When Newsom got the news of the recall in June 2020, his issued statement was that the unwarranted recall will cost taxpayers $81 million and it’s being pushed by political extremists supporting President Trump’s hateful attacks on California. Wonder why Newsom’s not worried about taxpayer’s monies concerning almost everything else.

In actuality, while Republican groups are getting their act together, there are disillusioned Democrats, Independents and Libertarians jumping on the bandwagon due in part to Newsom’s hypocrisy over his Covid 19 lockdown orders, crumbling infrastructure, failing public school system, overregulation everywhere, devastating wildfires caused by negligence in part caused by crazy environmentalists who didn’t want to clear trees that created all the fuel for the fires, and homelessness throughout the state but in particular in Los Angeles and San Francisco that makes them look like third world countries. The list doesn’t stop there it goes on. Making California a sanctuary state, closing churches, releasing prisoners from prison, stopping the death penalty, increasing vehicle registration fees, mandatory vaccinations taking away parental input. When the Arnold was governor, he lowered DMV fees before he left office. Democrats pushed fees back up and instead of seeing fee’s decrease as a vehicle gets older, the fees are right up there, even higher.

Company after company is fleeing California with most of them moving their businesses to Texas where housing costs are about 50% of California’s and no state income taxes.

According to Edward Ring’s November 19th article published in California Globe, “Recall Campaign Gets Powerful New Ally,” that new ally is in the form of Tom Del Beccaro. The reason this is so significant is because he is the former California GOP Chairman. He heads up a committee called Rescue California. It’s a Political Action Committee (PAC). Beccaro’s group “brings a powerful group of experienced politicians, political professionals, and donors to the front lines of the Recall Gavin movement, bringing help to what is already one of the most impressive grassroots efforts in California history.”

Having tried numerous recall’s unsuccessfully in Crescent City/Del Norte County, I can personally vouch for the recall effort as a difficult process. If you need 1,000 valid signatures, you have to collect at least 20% more because signatures will be thrown out for a variety of reasons. It’s not just getting signatures, it’s getting VALID signatures of REGISTERED voters. If the signer puts down their Post Office Box, it’s invalid. It has to be a street address in the same county where they are registered. Signers can’t abbreviate their city on the Newsom recall. Print Crescent City, not CC. Only one signature will be counted so don’t even think about signing twice. It’s also having enough volunteers and paid signature gatherers to get the job done by the deadline. No Dominion voting machines will be used in validating the signatures so FRAUD is not a option. On-line signatures are not valid. It has to be an original on the State approved form in blue or black ink.

In the past in Crescent City, tables have been set up in front of City Hall, the Post Office, Safeway, and Wal Mart to get signatures. Everyone still shops, pays utility bills at the City and sends letters and packages at the Post Office. During this inclement weather, it’s harder to set-up tables. There’s no sense in having forms rained on and ruined. The Republican Headquarters located on the corner of 3rd and I Streets in Crescent City is conveniently located so anyone can just walk in and sign when they’re open. Call first at 707 464 6966.

Now that over half of the required signatures have been collected and verified by in house volunteers, the next step is to get them to the Counties for verification. The trigger for this step is getting 10% of the required number. Nearly 900,000 petitions have been received, well past the 10% trigger plus the campaign is gaining steam with bags and bags of petitions being delivered daily via the post office to:

Finally, even though the deadline was pushed to March 17th, it’s best to think in terms of getting everything in and done by March 10th. If you want to sign a petition, you can contact the local Del Norte Republican Headquarters at 707 464 6966.