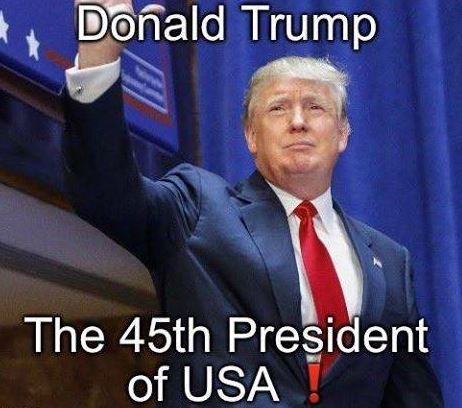 Having just witnessed the Inauguration of President Donald J.Trump, I am truly overwhelmed by this momentous event. Rarely have I been so moved by anyone’s words but I must share with you the inspiration and hope President Trump has brought to my psyche. I am not easily moved by rhetoric but this morning, I have goosebumps on my arms from his powerful presentation, a speech which rivals our 35th President, when John F. Kennedy said, ” Ask not what your Country can do for you but what you can do for your Country.”

During the last 16 years, middle class America has stood powerless and inert while politicians and their supporters became rich. Foreign governments became wealthy at the expense of middle class America. America and Americans comes first… I mean no disrespect to our Nation’s 43rd and 44th Presidents, George Bush AND Barrack Obama but I must share Brett Baird’s observation about each’s legacy. Regarding Obama: ” You can sum it up in two words: Donald Trump, ” for without the failure of of Barrack Hussein Obama contrived policies of , “we know better than you.” and George Bush (my opinion), there would be no Donald Trump, President of the United States.

This is no time to spike the football. I will continue to listen to and respond to the citizens of Del Norte County who bring me issues which have too-long been ignored. I include myself and other electeds to LISTEN to the people we represent. Failure to heed the public’s wisdom and those we are so honored to serve will be met with appropriate consequences.

9 thoughts on “It’s Official. Donald Trump is our 45th President”