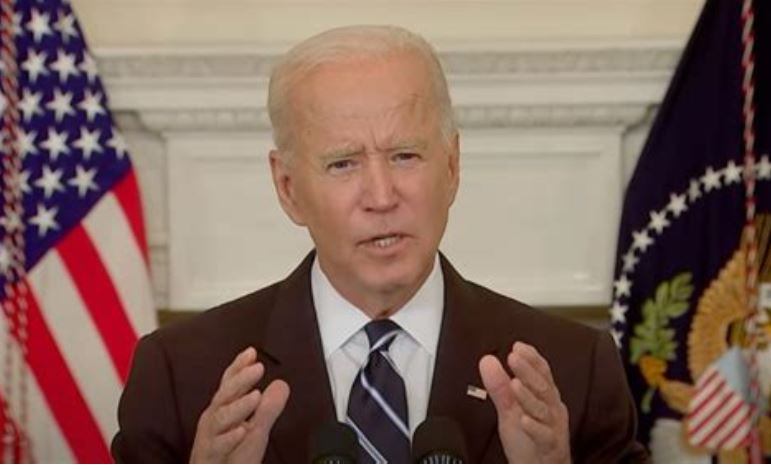 A speech came out of the White House last weekend to commemorate the terrorist attacks twenty years ago on 9/11. Throughout the speech, our Pretender in Chief, Joe Biden, called for “Unity” as Americans. Biden asked all Americans to rally behind a lie; that our Nation was founded on the principle that “All people are equal, throughout their entire lives.” That statement could be lifted from the Communist Manifesto; but not from our US Constitution or Bill of Rights. Biden made this 9/11 address one day after an executive order mandating Covid vaccinations or testing for employees of private businesses; stating “This is not about Personal Freedom.”

The actual words of our Constitution, that were so craftily butchered by our Pretender in Chief, read:

“We hold these truths to be self-evident, that all men are created equal, that they are endowed by their Creator with certain inalienable Rights, that among these are life, liberty, and the pursuit of happiness; that, to secure these rights, governments are instituted among men, deriving their just powers from the consent of the governed; that whenever any form of government becomes destructive of these ends, it is the right of the people to alter or to abolish it, and to institute new government, laying its foundation on such principles, and organizing its powers in such form, as to them shall seem most likely to effect their safety and happiness.”

The Communist Pretenders who successfully rigged our 2020 elections are quick to over-emphasize and expand the Constitutional statement about “equality” of creation, and fashion it into “material equality of outcomes” throughout life. “Dialectic Materialism” is what trained Marxists call this “material equality,” and it is the foundation of their religion of envy. Democrat Marxists take great pains to diminish the notion of “Free Agency” and personal responsibility.

The Constitutional guarantee of life, liberty and the pursuit of happiness has grave implications.

Depending upon one’s personal beliefs, Life can either be a temporary and meaningless quest for pleasure, power and wealth, a “Crap-Shoot,” a process of self-directed navigation through challenges with both risks and rewards, or the testing of one’s soul and spirit through trials and adversity.  Life, for the mature and sane, has never equated to a guaranteed equal outcome. Life does not include a guaranteed iron lung to breathe, or force-feedings for nourishment from birth to death; nor does it include a roof over one’s head, or any of the other necessities to meet our personal struggles to survive. Survival of the fittest leads to a strong and robust society. Life, for all but spoiled children or the insane, is not necessarily pretty, warm and fuzzy, nor even pleasant.

The “Pursuit of Happiness” certainly does not insinuate that we are born happy; if so, then happiness would not need to be pursued. We do not remain in perpetual happiness, and are not guaranteed happiness as an outcome. Nobody can give us happiness. We must pursue happiness on our own; however WE define it.

When a person matures, they realize that Life is a struggle; and the challenge, that requires sacrifice, pain and effort to survive or thrive. That process of struggle gives their souls and spirits value. The subsequent value is magnified even more when spent in self-determined sacrifice for others.

Free Agency is the God Given right for all people to choose whether to follow the path of good or evil. God is not a Tyrant.

There are natural consequences attributed to these paths of good and evil that all responsible adults must face. Instead of learning from the “School of Hard-Knocks,” we have “Holy” books, like the Torah, Bible, and Koran, and the fables and mythologies of old, with stories of people who chose wisely or poorly, and the subsequent consequences they personally enjoyed or suffered as a result of their actions. These stories,  allegories and “morals,” for a wise person, provide a guide for personal behavior. If a mistake was repeated often-enough, and the consequences were socially profound and widespread, then those actions were written down as prohibitions or “Laws.” to become tangible guides for behavior of an entire culture.

The traditional consequences of Free Agency are pretty simple. If we choose to follow the path of righteousness, dedication, loyalty, justice, hard-work, persistence, frugality, and kindness; then our actions in a free-society will yield success. Should we choose the path of shamelessness, betrayal, treachery, crime, sloth, reckless-abandon, imprudence and greed; then we can expect the opposite result of failure.

Many cultures and civilizations have bypassed these laws of Free Agency in the past. Each time this “Experiment” was launched on a grand scale, the culture or civilization collapsed. These “Experiments” require the application of Tyranny in order to remove Free Agency and alter the natural consequences of irresponsible behavior. Life, liberty and the pursuit of happiness by the individual must subsequently be sacrificed on the altar of collectivism. Entire cultures and societies have launched this Experiment through “social engineering,” crafted and implemented by tyrannical governments in order to enforce injustice and wickedness.

The word “Wicked” means “Twisted,” and has the same root as “Wick” (a single twine of twisted fibers, most often used inside a candle or lamp) and “Wicker” (twisted limbs or reeds, most often used for construction).

There are many in the United States who have happily exchanged their right to Free Agency and self-determination for the security of slavery through dependence upon entitlements. They have abandoned the opportunities and rewards for independence, innovation, creativity, production and hard-work. Instead, they have embraced the entitlements of dependence, conformity, consumption, and indolence.

In the not so distant past, most people derived pride from the challenges they overcame, and their personal accomplishments, which defined the depth of their character. The twisted Woke beings of today take pride in the color of their skin, their gender or gender fluidity, and their moral superiority as “Victims;” whether they were personally victimized or not.

“From all people according to their abilities; to all people according to their needs” is the promise of Marxism. What this lofty slogan ignores is the ugly truth of unbridled irresponsible human nature. There are those who, despite the equality of divine creation, will embrace evil and take the low course of behavior. To reward such people to the same degree as those who embrace challenges, toil and rigors of good is both an affront to God, and to humanity as a whole.

For the unruly child, and the adult Psychopath, the world is Pig-Heaven with an abundance of pleasures to be obtained by force or manipulation. Both spoiled child and Psychopath assume they are “entitled” by birth to everything that strikes their fancy. Their creed is “Do what thou wilt is the whole of the law.”  “Good” is simply that which gives pleasure to THEM; and “Bad” is anything that causes displeasure to THEM, or is a barrier to their desires. The concepts of empathy for others, personal responsibility, and consequences for thoughtless acts are foreign to those lost within self-centeredness. Without a moral compass, or with one that has been purposely miscalibrated, humanity follows the lower course.

“The rewards belong to those with the most melamine, who define their own gender, who embrace base drives and temporal pleasures, and were victimized before they were even born; who at best, in the end, rob the credit and rewards due to others; and if they fail, they fail having blamed the entire world, so that their place shall never be among those responsible adults who shouldered the burdens of freedom and independence.”

After guaranteeing life, liberty and the pursuit of happiness, our Constitution goes on to claim:

“that, to secure these rights, governments are instituted among men, deriving their just powers from the consent of the governed;”

Our present “Government” operates through the dictates of Joe Biden and his executive orders; making him a “Dictator.” No “President” has ever issued as many Executive Orders in such a short amount of time as Joe Biden.

Our present “Government” makes laws and spends resources with little debate, at the behest of ONE POLITICAL PARTY.

Our present “Government” now negates, by will of caprice, our Constitutional rights of liberty, in direct opposition to the consent of the governed.

Most important, our present “Government” was installed into office through a rigged election fraught with communist foreign intervention and domestic fraud.

The US Constitution continues:

“that whenever any form of government becomes destructive of these ends, it is the right of the people to alter or to abolish it, and to institute new government, laying its foundation on such principles, and organizing its powers in such form, as to them shall seem most likely to effect their safety and happiness.”

I will leave the reader to ponder these words for themselves. Every tyranny on the face of this earth, as well as our own, would consider such words to be “treasonous.” I’ve no desire to be shot or hung for interpreting the United States Constitution in Woke America. Nor would I be so foolish to repeat a single word from the 1776 Declaration of Independence, knowing it to be a one-way ticket to a lifetime of confinement or a hangman’s noose.

The destruction of our energy independence and reliance on Russia and Middle Eastern energy cartels?

The total elimination of our national borders?

The destruction of our middle class for the enrichment of the ultra-rich?

The bankrupting of home-owners, landlords and small farmers to benefit Hedge-fund monopolies?

The growth of homelessness and government predation upon this vulnerable class?

Indoctrination of our children to Critical Race Theory and LGBTQ gender neutrality?

The fostering of racial and political hatred against “White Culture” and “Capitalist Exploitation?”

Destruction of all cultural symbols linked to the “evil” United States of America?

Turning our backs to the American flag and kneeling during the national anthem?

Elimination of all free speech for conservatives in mainstream and social media?

War against all conservatives under the pretext of “Patriot Extremism?”

Requirements of Marxist compliance in the military?

The removal of all transparency from selected government agencies?

Bankrupting our treasury and the value of our dollar to enrich a select special interest groups and corporations?

US Government treachery and deception against governments who were once our military allies?

Betrayal of our citizens and allies stranded behind enemy lines?

Mandatory medical treatments against a citizen’s will?

Exclusion of criminals from medical mandates?

If you hate the United States and the people of this country, then unite with the “Democrat’s” Tyranny. If not, then consider the words in our Constitution and act accordingly.

A note of caution: Be wary who you trust or take into your confidence. Patriots are now branded as dangerous extremists. Expect to have your groups infiltrated, spied on, and betrayed by informers. Expect traps to be laid, and entrapment schemes to be launched. Use the wisdom that God gave you to guide your actions.