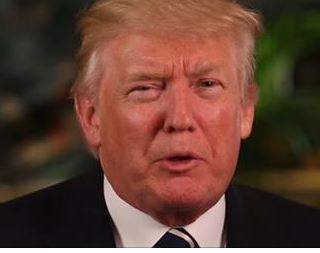 “My fellow Americans, we are the nation that built the Golden Gate Bridge in four years and the Hoover Dam in five. Now, it takes as much as a decade just to plan a major permit or a major infrastructure or anything even remotely major in our country, and that’s ridiculous and it’s going to change.

This week, I laid out a bold and exciting new vision for the infrastructure in America that will make our country faster, safer and wealthier. Frankly, it will make our country greater. For too long, America has spent trillions and trillions of dollars building up other countries while our own country decayed and our own people suffered. Our highways and railways and airports and seaports have all been neglected and it’s holding our economy back. But now, our economy is starting to roar and it’s time to rebuild our great nation and we have to think big and think big again.

My new vision for American infrastructure will generate $1 trillion in infrastructure investment. We’re going to give states and localities more power to decide what projects get built and how they’re funded and we’re going to get government out of the way by massively cutting the federal approval time for infrastructure projects of a major nature so that America can build again.

We will also revolutionize air travel in America. At a time when every passenger has GPS technology in their pockets, our air traffic controllers rely on technology so outdated it’s no longer manufactured. Our controllers do a great job with the technology they have, but all the flight delays and inefficiencies still cost our economy $25 billion every single year. We’re proposing to move our air traffic control system to a new self-financing non-profit organization. It won’t need any taxpayer money and the FAA will still be in charge of safety. Many other countries have done this and the results have been absolutely incredible.

Next, we’re going to revitalize the 12,000 miles of inland waterways, the lifeblood of the American heartland. Our agriculture, steel and energy producers all depend on these critical (inaudible) and a single tow boat can hold the same load as 1,000 18-wheelers. We’re going to fix our 50-year-old system of locks and dams so American producers can get their products to market quickly, reliably and efficiently.

In the coming weeks and months, I will outline additional projects to rebuild American infrastructure, all of which can be achieved through my vision for a new partnership between Washington, states and the private sector. With the talent, skill and drive of the American people, there is no doubt to the beautiful future we can create together. All it takes is a bold and daring vision and the will to make it real. America is going to build again under budget and ahead of schedule.

One thought on “Just in – President Trump’s weekly address – Infrastructure!”