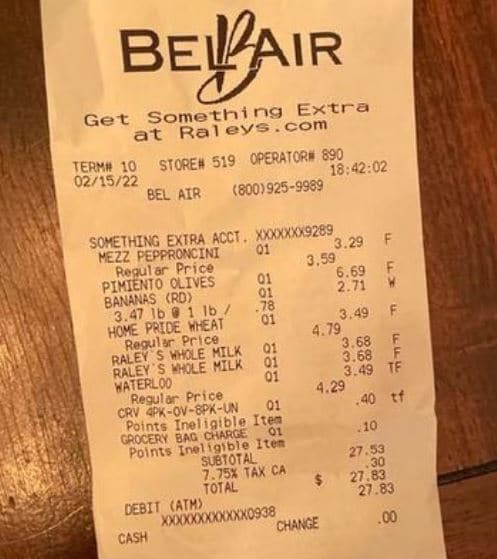 The Del Norte Board of Supervisors voted to delay the repeal of sales tax until November 2022. Their reason to delay was for them to conduct a study which takes 30 days. This denial is a slap to the voters whose signatures of nearly 900 which was double the amount needed to place it on June’s ballot.

Norma Williams, Union Representative spoke on behalf of all workers associated with pay raises. Tonya Pearcy stated she googled the Sales tax in Sacramento and found it was 8.75%. However this actual receipt from Roseville which is the higher end of Sacramento tells a different story. It shows 7.75% while Del Norte County is currently 8.5%.

Then there were the “feel sorry stories” on how deputies can’t make it on $102,000 per year including benefits. Lieutenant Schneck made over $222,000 in 2020 more than Sheriff Waltz at $185,000 all recorded on California Transparency.

With gasoline prices approaching $6.00 per gallon and possibly up to $8.00 per gallon by Memorial weekend will result in goods and food to inflate immeasurably.

Prolonging the vote until November will invariably seal the coffin shut because by November people will be hungry, crimes will rise, and so will death.

In the meantime why are our supervisors still wasting valuable time on a 50 year Tri-Agency? Because they want taxpayers to pay the USDA debt of $287,000 created by failed businesses who defaulted on their loans.