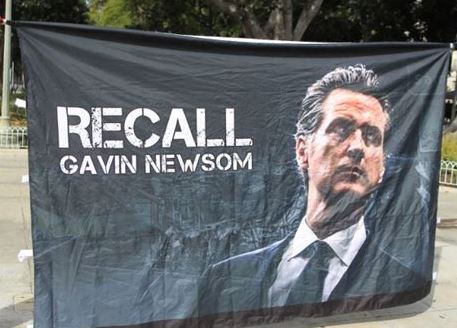 Now with the recall election safely in his rear view mirror and the
incompetent State’s legislators sent packing for a much needed holiday,
it has become Newsom time where the “empty suit” of his nature come to
full blossom.  In the brief periods between appointments with his
hairstylist, Governor Hair Gel has had ample time to consider offering
several witless proclamations.   In mind numbing fashion Newsom parrots
emergency declarations without end as his sense of well being flounders
in the cause of common sense.  Heaven forbid should he be associated
with anything remotely related to common sense.

His latest manifestations of clueless leadership came in the form of
several executive orders, those of wildfire support, supply chain
issues, water conservation bans, and the double whammy of oil production
bans coupled with health related issues near communities.  Wow, what a
magical series of the waving of his magical wand.  Not that there is
anything between his ears, but Governor Hair Gel clearly is unaware of
the unintended consequences of his actions.  Not such a surprise there.
Thanks again to those that voted “NO” in the recent recall election.

Most of us here in the Northern half of the State have been recipients
of an early rain filled Fall.  Not that Newsom is very aware of these
events, which likely will be heralded by his friends in the media as a
non event for those starving for water which in many cases freely flows
out into the Pacific Ocean with little to no effort at water storage.
Newsom moans about potable water being used for watering lawns, sidewalk
cleaning, and other non drinking water activities in hopes of conserving
his way out of California’s drought.  He talks about “Climate Change”
and records set during times that the events “HAVE BEEN RECORDED” LIKE
THERE NEVER WERE TIMES THAT EXCEEDED MODERN RECORDS.  Oh well for a man
more concerned with his hair what can you expect.  The executive order
continues to talk water conservation, lip service to storage, then moves
on to “projects that support wildlife and habitat restoration efforts,
and other nature based solutions”. Not much in there about expanding
water storage solutions and potable water supplies, unless you are a fish.

The next bit of magic wand waving comes in the form of “support to
communities recovering from recent wildfires”.  This edict comes mostly
in the form of a “ban on price gouging” in the affected areas.  There is
the grand list of Counties that fall under his edict, before moving on
to a brief meaningless pander for better wildfire response and
recovery.  Naturally he isn’t going to contribute much to that effort,
what do you think FEMA is for after all?  Heaven help us if the liberal
“Empty Suit” in Sacramento were to expend any State funding in the mix.

Ahhh….Finally the recognition by Newsom of the months old distribution
problem in the Ports of Los Angeles, and Long Beach. Must be
embarrassing to be up staged by the incompetent in the White House.  Bet
that Biden only has to have a bit of help finding two socks to match.
Wonder how Hair Gel manages that feat?  Maybe his hairstylist gives him
pointers.  In any event, his solution is a mighty swing and miss.  State
agencies are “directed to develop long term proposals to support port
operations and goods movement”.  What?   Like nobody knows about the end
goal at this point?  He continues with the need to “take action” and
then what?  Wave another magic wand?  Nothing about truck transportation
regulation over reach, just something about “electric powered trucks”,
allowing for over weight limits to be relaxed, then work force training
and education.  Seems like “State Land” is to be injected into the mix
as possible storage sites, but no attention is paid to the Unionized
port staffing that cannot meet the needs of 24/7 service in either port.

Then there is this bit of pandering to his base with a “ban on oil
drilling near Communities because of potential health risks. Never fear,
this is merely to wave his magic wand at his projections for the
complete elimination of Oil production with in  the State by 2045.
Fantasies will persist in some feeble leftist/environmentalist minds,
even after it doesn’t come to pass quite like Hair Gel envisions.  The
fact that the electric grid will not sustain such pie in the sky
endeavors is far from Newsom’s ability to process such details.  He goes
on to talk about his vision for the future of an oil free California,
Climate Change Goals, and future regulations making it much harder for
citizens in Newsom’s kingdom to have anything more than a medieval life
style.  After all who needs vehicles of any kind.  It is not as though
electric cars are feasible for anything other than royalty.