Land of the Electro-Monkeys: Part Two 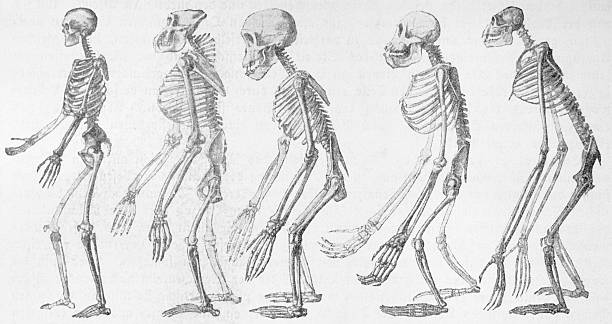 How far have we, as a species, come during the past couple hundred years? Some would call it “Progress;” but advanced technology does not necessarily equate to superior evolution or the ability to survive the challenges of raw unvarnished nature. Technology has certainly led to the proliferation of the human-race, but quantity does not equate to quality. Humanity has “Evolved;” but what is the result of evolution when “Survival of the fittest” no longer applies? Or worse, when “fitness” equates to a penchant for treachery, deception and betrayal. Are we, as a species, physically, intellectually or morally superior to those who lived before us?

By some accounts, the 7+ Billion people living on our planet today amount to the total number of humans that EVER populated the Earth from the beginning of civilization over five thousand years ago. Yet, humankind has never been more ill-suited for survival in Nature’s environment than today. The average Electro-Monkey lacks all of the basic skills that our ancestors took for granted.

Our “less evolved” animal companions, with few exceptions, conform themselves to their environment. If it is cold, they shiver, seek shelter within caves or beside fallen trees that already exist; or dig a den or burrow with claws evolved for the purpose. Physical evolution of their species provides more hair and fat to insulate them during seasonal environmental changes. We humans have “evolved” to manipulate our surroundings in order to cope with the challenges Nature throws our way. Therefore, our human species is more prone to adapt and change intellectually; rather than physically.

Let’s examine our lineage of “advancements,” and the most recent “Evolution” of technology  in order to determine how our modern gizmos of convenience impact the human-race.

First, consider the humble phosphorus “match.” Before the “modern” strike-anywhere friction match was invented and patented in the 1870s, common people used “Flint and Steel” to make fire. Flint and Steel are a rustic art-form lost to the bulk of our generation. Other than human and animal effort and toil, and a sprinkling of water-mills and wind-mills, fire was the ultimate form of energy for the past millennia.

The Ancient Greeks considered fire to be the “most important gift from the gods;” a technology that subsequently lifted mankind above the rest of our animal companions. Fire gave us warmth in frigid cold, allowed us to sanitize food and water by cooking, cauterize wounds, and kept predators away in the night. The gods of the Greek Pantheon had forbidden humankind from the knowledge of fire. Prometheus was credited for taking mercy on our wretched ancestors and bestowing the gift of fire to mankind. The price paid by Prometheus for his transgression, was to be bound to a mountaintop rock to have his intestines eaten each day by vultures, and restored each night, only to be fed upon the next day, over-and-over for eternity.

The first “Machines” were designed for travel and hauling, and they were facilitated by the “Wheel;” considered humankind’s second greatest invention, after fire. “Levers” were invented to multiply power when moving heavy objects. An invention called “Rope” could be used to bind objects together or climb, but also as a tool to create tension and transfer power. Rope, in concert with several wheels, using the principle of leverage, became block & tackle. Soon, wheels with segmented teeth, called “Gears,” were merged with levers to create the “Crank,” and a simple tilted block was added to allow one-way movement; creating the “Ratchet.” Paddles, Oars and Sails had been used by sailors throughout the ages to capture the power of water and wind. Eventually these simple tools were combined to create the first sophisticated machines as grain-mills for processing food, and for military siege-weapons to wage war on enemies. These simple machines evolved in complexity til the 1700s, when the Watchmaker’s skill created the first articulated human and animal robotic “Automatons.” All of these early machines were powered by “pre-winding” stored tension into the gears, springs and pendulums; or by capturing and harnessing the flow of wind or water energy.

When Watt invented the steam-engine in the early 1800s, fire would give rise to “locomotion,” and ultimately facilitate the “industrial revolution.” Throughout the 1800s, wood and coal would be the primary fuels for steam-engines. Yet, the simple spark of flint and steel was the primary catalyst for creating and capturing this essential element known as fire; until the invention of the match.

Folks in my generation grew up during the “Match Age,” when matchbooks and matchboxes were everywhere. Tobacco was smoked in pipes and cigars were prone to extinguish if not puffed on continuously. The modern “Cigarette,” laced with potassium nitrate, could be left in an ashtray and remain lit til completely consumed to ash. It would also remain lit if in contact with dry grass, paper, cotton cloth, or other combustible materials if discarded irresponsibly. Cigarettes were consumed in copious amounts in the 1900s, and in every public venue imaginable; smoking in markets, restaurants, movie theaters, concert halls, at sporting events and at work, in taxis, buses, and airplanes; and it was considered a “Right” to do so. Indeed, there were those who possessed the venerable flint-and-steel initiated gasoline-fueled WWI Trench lighters, or WWII era Zippo lighters; but matches still ruled the world of fire. Books of matches, printed with advertising, were given away everywhere. Thanks to the convenient ignition and access to matches, there was not a child alive who had not “Played with Fire.”

Then came the butane gas lighter with its piezoelectric ignition. The physical pressure upon a piezo crystal created an electrical spark, in-turn igniting the odorless butane gas.

We live today in the age of the plastic disposable “Bic and Scripto Lighter.” These operate as a hybrid of Zippo and Butane lighter, with flint and steel ignition and butane for fuel.

More important, we have had several generations increasingly dominated by electricity. Although electricity had developed for over a hundred years prior, there was one event that would spread its use worldwide. The 1893 Columbian Exposition, or Chicago World’s Fair, was a showcase for diverse world inventions, cultures, cuisines, market goods, machines, armaments, and even the first public flush toilets; but most important of all, it was a live advertisement for electricity.

Intended to commemorate the four-hundredth anniversary of the discovery of the Americas by Columbus, the Expo opened one year late. The Chicago Exposition came at a time when Butch Cassidy and his Hole in the Wall Gang were still youngsters, and five years prior to Teddy Roosevelt and his Rough Riders’ charge up San Juan Hill. The side-shows adjacent to the World’s Fair included Buffalo Bill’s Wild West Show and “Little Egypt’s” scandalous belly-dances, the first aquarium, public hot-air balloon rides, and most popular of all, the amazing “Ferris Wheel.”

The “White City,” manufactured of a white plaster substance, was powered by Tesla and Westinghouse’s new AC generators, and lit by Edison’s new light-bulbs. There were several municipalities that had replaced their old gas lamps with electric lights; but no place on earth had the degree of electrification as the White City. The nightly light-show consumed several times more electricity than the nearby City of Chicago, and was a marvel that nobody forgot. Considering electricity, at that time, was transmitted via un-jacketed wires, and with inefficient insulators, there were very few fires and mishaps at the Expo.

It took a year and a half to build the Chicago World’s Fair, and after 3 years of use, it was destroyed for salvage in less than a year. Ferris’ Wheel, a revolving Goliath that dwarfed any seen today, with individual enclosures that seated up to 40 patrons each, was dismantled for scrap metal. People in the 1800s were more concerned about making history, than preserving it.

Why these technological advances were promoted, and how they influenced our species will be a topic in future articles. What is important for now is for the reader to consider the avalanche of technology that occurred in just over a hundred years. One hundred and thirty years ago we were in the age of the horse and buggy; monarchies with kingdoms and empires  ruled most of the world. In the late 1800s, steam powered machines ruled both land and ocean; and hot-air balloons were the only aircraft. Newspapers, and books had been augmented in the 19th Century by photographs, phonographs and nickelodeon “moving pictures.”

It is also critical to consider if any of our emerging technologies could be as dangerous as an unattended lit match. Are we yet another generation of children playing with fire?

One thought on “Land of the Electro-Monkeys: Part Two”