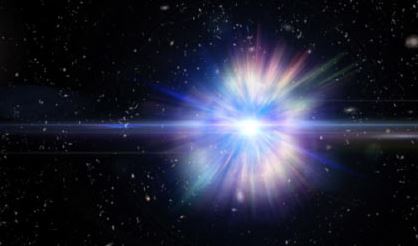 I just found out that the largest supernova on record was discovered just yesterday. These things are amazing to view. I remember one happening about ten years ago. While working nights at the Crescent City Harbor, there was a supernova visible for several weeks. On one of the foggiest days that I can recall, all of the lighting in the harbor was obscured. Everything was pitch black. My truck was parked because it was unsafe to drive. I could barely see more than six feet ahead of me through the headlights. None of the streetlamps were visible. None of the dock lights were visible. None of the boat lights were visible. The high intensity lights that illuminate the flag at the harbor entrance were not visible. However, I could see the bright light of the Supernova on the horizon, like a bright star in the sky. . . the only light in the sky. The only light visible anywhere, with the exception of my truck headlights. The light of the supernova cut through the fog and haze like nothing. It appeared as bright and clear as ever.

I was under the impression that this supernova just happened, but the follow-up data points to an event that began months ago. I am still trying to find the coordinates of the supernova location. Here is an excerpt from the UK website “Astronomy Now.” Pay close attention to the final paragraph- it would take our sun more than 90 billion years to emit the same amount of energy released by this supernova in the past four months. As I mentioned before, these things are really bright!

“Records are made to be broken,” as the expression goes, but rarely are records left so thoroughly in the dust. Stunned astronomers have witnessed a cosmic explosion about 200 times more powerful than a typical supernova — events which already rank amongst the mightiest outbursts in the universe — and more than twice as luminous as the previous record-holding supernova.

At its peak intensity, the explosion — called ASASSN-15lh — shone with 570 billion times the brightness of the Sun. If that statistic does not impress, consider that this luminosity level is approximately 20 times the entire output of the 100 billion stars comprising our Milky Way galaxy.

The record-breaking blast is thought to be an outstanding example of a “superluminous supernova,” a recently discovered, supremely rare variety of explosion unleashed by certain stars when they die. Scientists are frankly at a loss, though, regarding what sorts of stars and stellar scenarios might be responsible for these extreme supernovae.

As described in a new study published today in Science, ASASSN-15lh is amongst the closest superluminous supernovae ever beheld, at around 3.8 billion light-years away. Given its uncanny brightness and closeness, ASASSN-15lh might offer key clues in unlocking the secrets of this baffling class of celestial detonations.

“ASASSN-15lh is the most powerful supernova discovered in human history,” said study lead author Subo Dong, an astronomer and a Youth Qianren Research Professor at the Kavli Institute for Astronomy and Astrophysics (KIAA) at Peking University. “The explosion’s mechanism and power source remain shrouded in mystery because all known theories meet serious challenges in explaining the immense amount of energy ASASSN-15lh has radiated.”

ASASSN-15lh was first glimpsed in June 2015 by twin 14-centimetre aperture telescopes in Cerro Tololo, Chile conducting the All Sky Automated Survey for SuperNovae (ASAS-SN), an international collaboration headquartered at The Ohio State University. (Hence ASASSN-15lh’s somewhat menacing moniker.) These two tiny telescopes sweep the skies to detect suddenly appearing objects like ASASSN-15lh that are intrinsically very bright, but are too far away for human observers to notice.

“ASAS-SN is the first astronomical project in history to frequently scan the entire optical sky for optical transients,” said Krzysztof Stanek, professor of astronomy at the Ohio State University and the co-Principal Investigator of ASAS-SN. “Every time in science we open up a new discovery space, exciting findings should follow. The trick is not to miss them.”

Dong and colleagues immediately put out word about the sighting of ASASSN-15lh in order for as much data as possible to be gathered. Multiple, far larger ground-based telescopes across the globe, as well as NASA’s Swift satellite, have since taken part in an intense observing campaign that continues to this day.

In just the first four months after it exploded, so much energy beamed out of ASASSN-15lh that it would take our Sun in its current state more than 90 billion years to equal its emissions. By examining this bright, slowly fading afterglow, astronomers have gleaned a few basic clues about the origin of ASASSN-15lh.”

I am going to try to find this new supernova in the night sky. It should not matter if there are clouds in the sky or not. From experience, I know it will definitely be visible. You should try to get a peek yourself. These things do not happen that often, and they are quite spectacular!

One thought on “Largest Supernova”