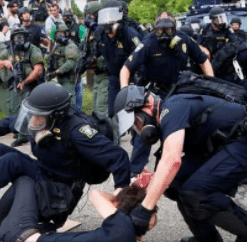 A couple of years back, during the Portland and Minneapolis riots another Del Norte Supervisor and I attempted to pass a Proclaimation in support of ALL law enforcement officers.

One sentence in the County Proclamation stated, Law Enforcement was” … Under Seige.” Then-Chairman of the Board (and current Board Chair), Gerry Hemmingsen, in private, altered the document to DELETE ” Under Seige” before presenting to the full Board for approval. It was a unilateral decision which Hemmingsen had no authority to exercise and despite justifiable complaints from myself and the other supervisor, the watered-down Document was approved.

Matters have worsened and police are indeed under seige. With seven officers shot in the last 48 hours and three killed, “Under Seige” would be an apt description of those who serve and protect us.

2021 was the deadliest year in over two decades. According to the Officer Down Memorial page, 73 officers were killed by criminal felons this last year. 2022 is starting off notoriously poor for the health, safety and welfare of American law enforcement.

Sadly, the shortsightedness of the Gerry Hemmingsens can and will endanger the lives of those who swore an Oath to protect us.

It is specious thinking remote Del Norte County is immune from the evil doers who apparently have license to kill cops.

Here are but a few of the George-Soros backed District Attorneys who ignore or deeply discount felony crime:

*Fernando Arroyos to Federal Prosecutors who have a Death Penalty option in the prosecution of the four suspects arrested.

* Alvin Bragg, District Attorney for Manhattan (NY) who is tasked with prosecuting slain NYPD Officers, one was 22 year-old rookie Jason Rivera and his partner Wilbert Mora.

* Larry Krasner, District Attorney, Philadelphia County (PA) who is as radical, lawless and dangerous in defense of criminals as one can only imagine. Two of his clients from his private practice are the notorious anti-Semitic Black Lives Matter and Occupy Philadelphia. The Soros-backed list goes on.

AND All are Democrats . We must stand tall for our law enforcement. Make no mistake. Police are Under Seige.