Let’s See, How Many Times Can The High School Schedule Be Unveiled as “New 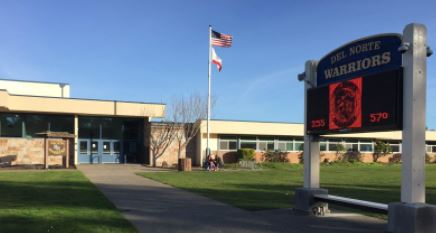 For many of us, the path to success was, notice the verb is “Was”, a
good education.  While the current Del Norte High Principal, Alison
Eckart, points to the past eighteen months of COVID-19 disaster as the
reason for the high school’s dismal performance, perhaps she must be
unaware of the fact that the local public schools, which include the
high school, were a disaster long before Covid-19 reared its
debilitating head.  One would think that someone who has spent twenty
five years in a classroom, locally, would know this.  Is it because the
past eighteen months of educational fumbling has made the lack of
educational success so obvious, that it can no longer be hidden from
public view?  Or is it that the whole educational system after years of
lackluster performance has finally caught up with teachers that were
educated in the very system that has them in today’s classroom?

Granted, one cannot paint broad strokes of blame over all who currently
occupy the ranks of the educational community as they should not be held
libel for decades of poor systemic teaching. Yet we continue to expect
some sort of expertise from today’s teachers that has not been forth
coming.  Teaching methods, tinkering with scheduling,  more counseling,
more contact with teachers, and on and on are “solutions” that seem to
appear in a regular cycle.  As with anything that has been tried
multiple times and failed, why would our theoretical “brightest”
educators be trying them again?

Clearly Principal Eckart, who has been in the educational community and
in a class room as well, would know and understand that tinkering with
class daily scheduling will have zero chance of changing the downward
spiral of public education.  If she has at any time been in the
classroom and noticed that most students have the attention span of a
gnat.  Encumbering them with ninety minute periods will only serve to
waste seventy minutes of valuable teaching time.  Ms. Eckart should be
well acquainted with the phenomenon where young people can literally be
counted on for showing some sort of deprivation should their cell phone
be set down for more than ten seconds at a time.  That is the only place
where students might be expected to display an attention span of longer
than twenty minutes in the classroom setting, providing it was some form
of social media and is not educational.

It hasn’t been that long ago in this very school system that similar
scheduling changes were proposed with not much change except a continued
downward trajectory in over all performance at the high school.   It was
once pointed out to the School Board over thirty years ago when
educational performance was a similar disaster, that eighth grade
students a hundred years ago had to pass a test to graduate that most
college educated students currently would be unable to pass.  Clearly if
changing the high school schedule from six periods to four ninety minute
periods is the modern day answer to the problem, Principal Eckart
seriously needs to reevaluate her role as principal at Del Norte High
School for this has little to offer that has any chance of success.
Repeating failure is not the answer to educational success.