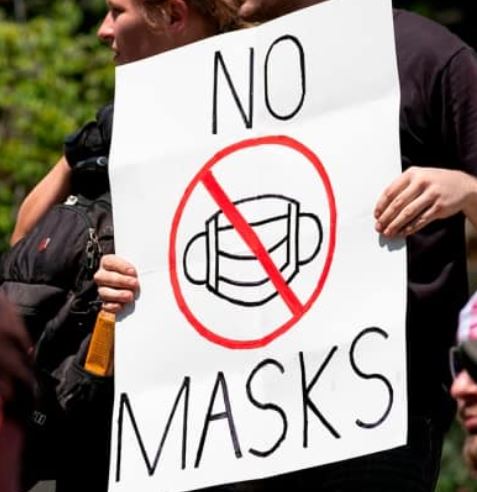 In another lame but entertaining presentation to the Board of
Supervisors on Tuesday, February 8th our Public Health Savior, Lord
Aaron Stutz announced that he will be rescinding the Covid Masking Order
in lock step with Sacramento.  Apparently, visits to hospitals and
nursing homes will no longer require a negative test prior to the
visit.  Must be closing in on election day.  Indoor mandates for
healthcare workers and K-12 schools will NOT be lifted.  The K-12
masking makes about as much sense as driving down a freeway at 100 mph
on the wrong side of the freeway divider.

Not only has it been grudgingly acknowledged by even CNN and various
other media outlets that masking is totally useless, Stutz really should
keep up with the news, and he wouldn’t be made to look the fool when he
says in an open Board Meeting “there is scientific evidence that facial
coverings protect against Covid transmission” when there isn’t any.  He
goes on to argue health officials “wouldn’t be harping on it if it
wasn’t effective.” Naturally he isn’t aware of nearly sixteen years of
masking research, including some recent international papers by
respected researchers that say the exact opposite.  There is NO
legitimate science that supports masking prevents either transmission or
infection including use of an N95 mask.  In fact there is reason to
believe that much larger bacteria also circumvents mask wearing
physicians during surgical procedures.

As to the question of masking student populations, one of the least
likely to become infected, transmit or encounter a serious outcome.  The
current number is 99.9998 percent will not become a statistic.  Young
people have far too many other issues that are far more likely to end
tragically.  The stumbling block here appears to be the California
Teacher’s Association.  Teachers who occupy a room with students that do
not transmit Covid easily. Teachers who are vaccinated and masked.  The
arguments proposed by the Union to provide teacher safety in the
classroom are shallow indeed.   When adults will soon be able to be
indoors without a mask, how does this make any sense at all?  How will
Lord Stutz be able to justify this further masking mandate after
February 15th? The ultimate capper in Stutz’s presentation on K-12
Masking was the statement, “While he agreed that children’s education
had suffered as a result of the Pandemic, MASK WEARING HASN’T HARMED
THEM.”  Emphasis added.  It could be said what planet is this man on,
but that would be too kind.  This man is an idiot.

His talk about numbers of infected and hospitalizations wasn’t much
better.  When braced by questions of whether or not people at Sutter
were actually dying from Covid or just simply with Covid, he
prevaricated once again.  Normally a doctor attending a patient would
likely know the cause of death and be able to distinguish a Covid death
from some other cause.  For Lord Stutz, his word salad is enough.  A
terminal cancer patient or heart attack victim could very likely be
termed a Covid death rather than the reality in Stutz’s world.  It seems
it becomes much to complicated to determine fact from fiction.

According to the Del Norte County Public Health Department 62 new cases
were recorded over the weekend with the total active cases at 276. Forty
three of Del Norte County’s residents have succumbed to Covid-19.  The
most recent fatalities were in their 80’s . There are currently five
hospitalized Covid patients, two are unvaccinated.  A single patient is
in intensive care.  It was not reported whether that patient was
vaccinated or not.  Further information has noted that new cases of
Covid have noticeably declined by 25% over the past week and the surge
appears to be nearing its conclusion.  Will this mean that folks can
return to more of a normal life?  Maybe the adults, but not our school
aged children….. at least until the next round of Covid surge, but
maybe not until after November’s elections, surge notwithstanding.