Los Alamitos Ordinance to Opt Out of SB 54 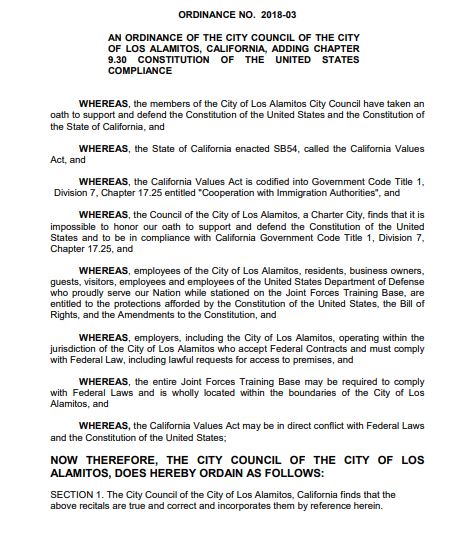 The fallout against the state from the Los Alamitos Ordinance has the following cities and counties in discussions about drafting their own Ordinances to opt out: City Councilmember, Travis Allen in Huntington Beach, (he’s currently running for Governor), Buena Park, Upland, Fullerton, Costa Mesa, Newport Beach, and Orange County.  In addition to opting out of SB 54, many are discussing joining the lawsuit currently filed by US Attorney General, Jeff Sessions against the State of California which included naming Gov. Brown and California Attorney General Xavier Bacerra.

The Escondido City Council recently voted to support the federal suit against California but did not join the litigation.

However, the city of Los Alamitos  and Aliso Viejo as well as Orange County BOS intend to file an amicus brief to the Federal cast.  San Diego County BOS is considering filing it’s own brief.