Major Victory for citizens of California 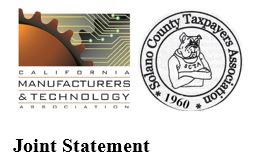 SACRAMENTO, May 10, 2017 – In May 2014, the Solano County Taxpayers Association (SCTA) and California Manufacturers & Technology Association (CMTA)  jointly filed a lawsuit in Sacramento Superior Court asserting that the state did not consider economic feasibility in adopting a drinking water standard for hexavalent chromium. SCTA and CMTA made the following joint statement on the Superior Court’s final decision:

“On May 5, the Superior Court of Sacramento County issued a final decision in the writ petition filed by the Solano County Taxpayers Association and the California Manufacturers and Technology Association challenging the drinking water standard established by the State of California for hexavalent chromium.  The Court found that the State had not conducted an economic feasibility analysis of the drinking water standard as is required by law and ordered that the standard be withdrawn and a new standard be established.  SCTA and CMTA look forward to providing information to support development of a new drinking water standard that takes economic feasibility into account.”

Hexavalent chromium occurs naturally in water supplies across the state at levels that often exceed California’s now vacated 10 ppb standard. According to engineering studies commissioned by the Association of California Water Agencies and submitted to the Department of Public Health on the proposed regulation, efforts to eliminate this naturally occurring hexavalent chromium would have cost water utilities upwards of $4 billion.  These costs would have been passed on to California consumers. In its August 2013 analysis of the drinking water standard, DPH reported that in smaller water districts, an average household would pay $5,630 more per year on their water bills to meet the 10 ppb standard.  When the drinking water standard is withdrawn, the existing standard for total chromium will continue to limit hexavalent chromium to 50 parts per billion.