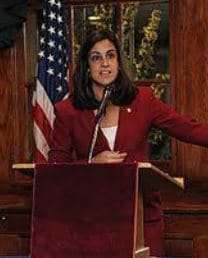 It took one week for the United Nations to get its act together and respond to Russia’s invasion of Ukraine — kind of. Last Wednesday’s vote by the UN General Assembly, in support of a toothless “censure,” is a punishment akin to the class bully being forbidden to speak in class for a week; the bully doesn’t care, and he’ll still push kids around in the hallways.

It came after the Russian Federation ambassador, who served as temporary chairman of the UN Security Council in February, put the totalitarian tactics of Vladimir Putin on full display by vetoing a resolution supporting the sovereignty of Ukraine, condemning Russia’s invasion and calling for an immediate withdrawal of Russian forces, claiming that it conflicted with the wishes of the Ukrainian people.
Since the start of Russia’s unprovoked invasion, more than 2 million refugees have fled Ukraine. President Volodymyr Zelensky informed members of Congress this past weekend that the civilian death toll in Ukraine continues to climb — likely outpacing the number of military casualties — as Putin continues to shell Ukrainian infrastructure and target schools with unrelenting missile strikes and bombs.

Unlike the UN, international organizations, ranging from the European Union to the International Olympic Committee, have rapidly responded to the ongoing situation in Ukraine with direct penalties against Russia. The same can be said for the private sector, as a wide range of multi-national companies have closed down operations in Russia or banned imports of their products into the country. Even Lukoil, the Russian energy giant, along with Russian oligarchs, have daringly spoken out against Putin’s aggression. More than 4,300 Russian demonstrators across 21 cities have been detained for denouncing Putin’s regime. Heck, the issue has even united Democrats and Republicans on Capitol Hill. It seems that all but the “crazy man” who started this inhumane war knows Russia is on the wrong side of history.

If ever there was a need for swift and deliberate action against Russia, the time is now. Yet the best the UN has done thus far is denounce Russia’s leaders. It is absolutely abhorrent that the UN is standing idly by while Russian forces continue to commit genocide while destroying residential apartment buildings, sacred burial grounds, kindergartens, orphanages and hospitals. While no permanent member of the UN Security Council has ever been removed, Russia’s actions warrant an unprecedented response.

As the most influential international peace-keeping organization, the UN cannot continue to give Putin and his murderous regime a pedestal to promote his heinous propaganda. The time for action is now. Remove Russia from the UN Security Council, and while we’re at it, the UN Human Rights Council. As Edmund Burke said, “The only thing necessary for the triumph of evil is for good men to do nothing.”