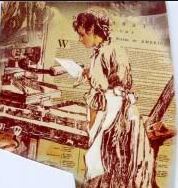 In my mind Mary Katherine Goddard faced a most difficult path to
becoming a notable American in an age, the eighteenth to early
nineteenth centuries, where women were essentially second class
citizens.  Born in Connecticut in 1738, Miss Katy as she was known, went
on to make her mark as a publisher, writer, bookseller, and one of the
United States first Post Mistresses in Baltimore Maryland.  At an early
age Mary was fortunate enough to be born in a family who believed that
both children, Mary and her younger brother William, deserved to be
educated in a time where most felt only males should have that
privilege.   Mary Katherine’s mother, Sarah, was instrumental in seeing
that both children were well educated before setting forth in the world
to become responsible for several early newspapers in Rhode Island,
Pennsylvania, and Maryland.  Granted it was normally Williams task to
initiate the process often funded by his mother, yet it was left to Mary
Katherine, at the age of 24, and her mother to make the early newspapers successful.

In spite of all her accomplishments as a journalist, editor, and
publisher, perhaps her most famous accomplishment was publishing in 1777 the Goddard Broadsheet, which for the first time included the
Declaration of Independence with it’s signers.  Her full name as printer
was included on the Broadsheet.   Mary continued as a bold advocate of
the American Revolution as well as publishing several first accounts of
the battles being fought during the war.

Publisher, journalist, editor, and patriot, were but a few of Miss
Katy’s accomplishments during her long life.  Bookseller, book binder,
book shop owner were just a few of the tasks that occupied Mary’s spare
time.  All at a time where society was male dominated.  A truly amazing
life Miss Katy lived until her death in 1816 in Maryland.

The truly sad thing about this amazing woman is that most Americans in
2020 do not know she even existed.  It seems in modern America, history
is but an after thought.  It is therefore, important for young people in
this country to recognize that America’s past is nothing to be ashamed
of but celebrated as a unique experience in human history.    Mary
Katherine Goddard, a woman of achievement, was an early advocate for
freedom of speech and the rights of women.   Someone to be honored as an
early example of grit and determination.