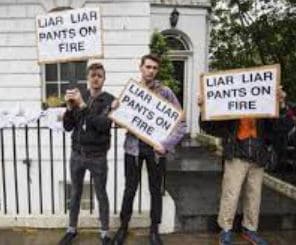 The biggest Heist ever pulled off by Del Norte County Officials was the passing of Measure R. The Government succeeded by doing what it does best. Lies.

Measure R was for Law Enforcement, Fire Department, fixing our roads, and would have it’s own account separate from the general fund.

Measure R is kept in the general fund and this is why. There are two ways to pass a tax. One way is to have sales tax specifically earmarked for projects, and requires a 66% vote from the public to pass. The other tax is for a general fund tax which only requires 50% plus 1 vote. That is why Measure R is and always will be in the general fund. Chief Administrative Office (CAO), Neal Lopez and Supervisor District 3, Chris Howard lied to you when they said that Measure R money was kept in it’s own fund.

The Hand picked Citizens Oversight Committee (COC) will protect the measure R funds and see to it that they are appropriately spent. More lies from the Government. None of the COC folks have been trained on what to look for and the Chair David Jones is as uneducated as the day is long. When he read his report to the Board of Supervisors on June 28, 2022, it was clear, no transparency had been demonstrated. The only money talked about was $6,500.00 spent on the Veterans Building. Nothing else was mentioned. In fact, the report Mr. jones gave was down right embarrassing. Any 5th grader could have created a more substantive report. So what happened to the $2.4 Million?

Currently, the Pension Liability is over $57 million dollars and the county has nothing to back it up with. Norma Williams the “Union” President, touts, “These people work hard and deserve their fair compensation compared to other counties.” Well Norma, Nobody said anything about Cops not deserving their wages, but prior to our new Sheriff the cops managed to take a jail house that was built after the prison opened, and literally turned it into a facility you would find in a 3rd world country; it is in complete disrepair. Why? Because they were too damn lazy to conduct their duties and due diligence. Money can’t change that form of laziness and lack of pride in what they do.

If Measure R is repealed it will have a critical effect.

When a person goes to enough meetings, political debates, you begin to hear the blatant lies that are being spewed from Chris Howards mouth and Neil Lopez. In March of this year I personally met with Chris Howard and Neil Lopez who handed me a paper with numbers on it. $600,000.00 was to be spent on patrol cars. I pointed to that number and asked, “ Why so high?” Lopez stated, “Oh that is a mistake.”

On May 24th, 2022, Mr. Lopez informed the COC of Measure R that the Measure R would not be used for the patrol cars because there was enough money in the general fund to pay for the patrol cars. REWIND….$768,000.00 is allegedly getting spent on Law Enforcement agencies, but let’s think about that for a moment.

I have requested information from Neal Lopez, have not received the information yet and I am pretty sure I know why. The information I requested was to give the amount of wage increase per position per month. Why do I ask for that? Because I am pretty confident those numbers will not add up to $768,000.00 per year.

So where is the money going?

Oh, it is for the new positions the County Added. The ones where the County will not be able to provide a pension to in 20 years.

My guess is the Clerk’s Office will find enough invalid signatures on the repealing of Measure R, that they will get to keep it another couple of years. Anyone want to make a wager?