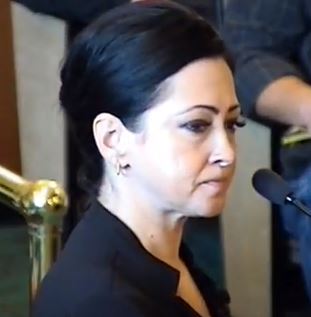 Do you ever travel to foreign places and wonder how or why their culture developed a certain way?  Someone visiting the United States intent on learning our history could visit Washington DC and spend hours or days, months or years reading and researching why our nation is the way that it is.

We are governered by the rule of law. We are a nation of immigrants. We are held together with 50 states that all took an oath to uphold the Constitution of the United States.  And then there’s California.

Our Governor, Jerry Brown, decided that illegal aliens deserve some of the same rights and privileges as citizens. Then, he championed SB 54 turning California into a Sanctuary State giving illegal aliens even more rights.  The right not to be deported when they’ve committed crimes because his law has tied hands of law enforcement.

At Tuesday’s, April 24th Board of Supervisor’s meeting, Erin Cruz spoke during public comment.  She’s not a resident of Del Norte County.  She’s a visitor. She’s running for the US Senate seat that 84 year old Dianne Feinstein has occupied for 26 years. She may not make it this go-around, but I predict she’s going to show up more and more in California’s future political arena.

Here’s when she lambasted the BOS: “It’s very infuriating when I see individuals who sit on boards and can sit here and can stand also against the United States Constitution and make excuses as to why they do so. Instead of putting national security first, and putting the citizens of their community first.  I have a problem with that.”

Then she had the guts to call it as it is: “Think long and hard before you stand against the citizens of the United  States of America and the citizens of California because there are people here who are said to be undocumented or immigrants.  They are illegal aliens, folks. They are.”

When she ended her public comment, it was like being back in the audience  at a silent movie.  Half the audience were clapping for her (those opposed to SB 54) and the other half were booing her (those in support of SB  54) Hero or villain? Who do you want to root for?  You can watch the video here.

You want to know about the demise of our country?  It’s when people deliberately misinterpret and skew the rule of law.  Immigrant is not the same as illegal alien.  Gov. Brown may want to make them the same, but it’s not and never will be. When a country discounts their borders and their immigration laws and does not do their due diligence like background checks on those coming into our land, we are just sitting ducks waiting to be decimated. When our State legislators decide it’s better to protect the criminals than the law abiding citizens of California, we’ve got a major problem folks.

When our gang of three (Cowan, Howard and Hemmingsen) state there’s no urgency to deal with SB 54 because our County is not impacted the same way as Southern California, we’re got a huge problem. They have completely missed the point.

What is the point?

The Constitution of the United States of America. Illegal aliens versus legal immigrants. Protecting the citizens of California from illegal alien criminals.

Although Cowan and Howard are registered Republicans, someone is bound to hand them a registration form so that they can re-register to the party they really represent.

Erin Cruz may have an uphill battle today fighting against politicians like Feinstein, and Kevin de Leon (Democrat). But at the rate she’s going, by introducing herself to communities; pretty soon she’ll be a serious challenge to James P. Bradley, the number 1 contender (Republican) against de Leon. It’s scary to realize that Dianne Feinstein has over $10 million in her war chest to go for another round in the Senate. She’s a prime example of why we need term limits.

But, don’t discount the little guy.  Whether it’s de Leon, Bradley or Erin Cruz, some day Feinstein will be unseated.  Let’s hope we get in people like Erin Cruz who love the Constitution and want to see our nation succeed and prosper.

One thought on “Meet Dynamo Erin Cruz, applauded and booed”