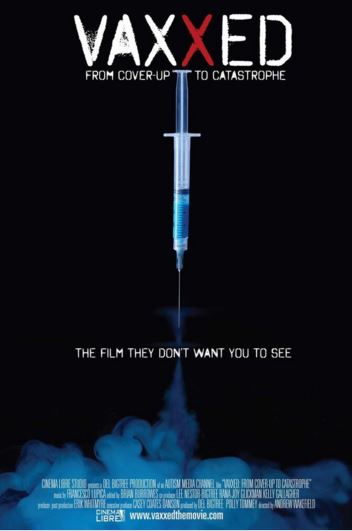 The worst thing that can happen to a parent is losing their child to death.  The second worst thing is losing a healthy child to a condition like autism when it could have been prevented.

Why would the prevalence of autism in the United States jump from 1 in 15,000 in 1987, to 1 in 110 in just a few short decades? In the documentary, “VAXXED: From Cover Up to Catastrophe,” the evidence is strong that the Mumps, Measles and Rubella (MMR) vaccine is or was causing autism since it’s use in 1989.

According to the trailer, one brave whistleblower, CDC Scientist, Dr. William Thompson, came forward to reveal the MMR studies that were covered up showing a correlation between autism and the vaccine. However, in the last year has apparently changed his story which may be due to outside pressure.

Thimerosal is the mercury-based vaccine preservative that has been linked to epidemics of neurological disorders, including autism, in American children born after 1989.

If the information in the movie is accurate, what can the public do when a Federal agency like the CDC designed to protect our health instead chooses to wreck our children’s health? DEMAND CHANGES.  Start calling your elected officials and complain. But, at the very least, do your own research. Was your child, grandchild, friend’s child, niece or nephew damaged after receiving their MMR vaccine?

The next cover-up is preventing movies like VAXXED from being shown. It is within our power to spread the word about the 2004 CDC study that revealed a causal relationship between the MMR vaccine and autism. Actor/producer, Robert Di Nero, pulled the film from the Tribeca Film Festival after a huge backlash.  He and his wife, Grace, have a child with autism.

When the freedom of expression is squashed preventing our 1st amendment rights from being heard and seen, we’re in trouble as a nation.

Director of VAXXED, is Dr. Andrew Wakefield, British gastroenterologist,  and according to ABC News, “the disgraced former doctor who published a study blaming vaccines for the rise in autism. The study has since been discredited.”  His reputation ruined.  His medical licensed pulled in the United Kingdom.  His 2012 lawsuit filed in Texas was lost in 2014, and he’s now considered a vexatious litigant.

As I experienced sitting on the Crescent City, City Council for four years, whenever 3 or more people get together and plan to ruin someone’s reputation, spin an argument that instead of them costing the public millions of dollars; that you’re the one costing the public. Then when you sue them, you lose in court because some Judge misinterprets what a SLAPP suit is all about.  Personally, I’m more apt to believe Dr. Andrew Wakefield instead of believing the CDC because of the continued drivel they continue to publish about fluoridation being good for everyone.

Could it be that billions of dollars are at stake here in the pharmaceutical industry?

Or has the industry changed. There’s a very good reason to use preservative in vaccines.  And it’s been proven that vaccines have saved millions of lives.

But years ago, according to one family member, the problem was that the mercury levels of the many vax combined exceeded safe amounts for infants and toddlers. The mercury content was too high. The small amount that is in current vax no longer reach those levels; but that does not mean that all children will not have adverse effects.

Producer of VAXXED, Del Bigtree, from their website states, “It is important to note that this is not an anti-vaccine movie as it has been commonly portrayed in the media…..documents strongly suggest fraud at the CDC.  That is what this film is about.”

WHY: Every 7 minutes a child in the U.S is diagnosed with autism.

Bigtree was an Emmy award-winning producer on the daytime talk show The Doctors, for six years. With a background both as a filmmaker and an investigative medical journalist, he is highly regarded as an unbiased investigative research into stories that push the envelope of daytime television. When Bigtree began investigating the story of the CDC Whistleblower and the fraud perpetrated by the CDC he soon realized that he had stumbled upon a story of corruption and deception beyond any he had ever seen. Further investigation into the wrongful destruction of Andrew Wakefield’s career orchestrated by Big Pharma and the UK Department of Health inspired him to leave his prestigious job on the award-winning medical tv show and focus all of his attention on what he believes to be the most crucial documentary of the year. Bigtree is proud to be working side by side with Andrew Wakefield, one of the most important minds of our time to create a documentary that will not only alert Americans to the outright destruction of their civil liberties but will lead the charge to demand the formation of a genuine independent research body conducting legitimate science to ensure that all vaccines are truly safe.

Personally, I’m pro vaccinations for the general public, but against mandatory vaccinations.  If dangerous amounts of mercury were used as a preservative and that accounts for the sudden increase in autism over the last 27 years, then someone should take responsibility for it. If autism continues to spiral out of control, then more investigations are needed.