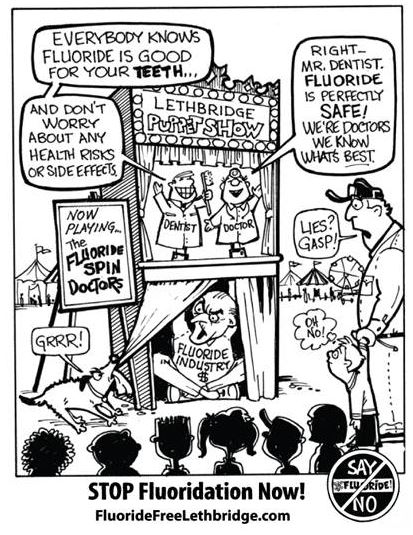 Things come apart so easily when they have been held together with lies. ― Dorothy Allison Here’s a letter from our friend, Gilles Parent, ND.

Last evening, the city council of La Prairie, a suburb on the South Shore of Montreal, (population of 20 000) passed a resolution to stop fluoridation.  It was a unanimous vote of the council.  Mrs Andrée Gendron et Mr Alain Branchaud with the help of the Coalition Eau Secours have been working on the issue over a year now.  They were going to the council meeting to ask for a citizen discussion of the issue as planned in the municipality of Chateauguay next spring but the council resolution was presented before their request.  The major victory of the recent consultation (76%) that was held in Richmond last October seems to have influenced the council. Respect, science and education have been used all along and illustrated the opponents’ actions.

This second victory in a short period after many others in the last 8 years in a province in which all expenses for fluoridation (construction, equipment and products are reimbursed by the government) is a sign that we are tolling the knell of fluoridation in Quebec.

Fantastic news Gilles. Felicitations et merci a tout.
Quebec’s 2014 population is roughly 8.18 M, so 20,000 people less fluoridated represents a 0.25% reduction.  Previously Quebec’s fluoridation rate was 2.4%, so now it’s down to 2.15%.
BC’s population is 4.14 M and a total of 61,484 people remain fluoridated in four cities. That makes 1.48% of BC fluoridated today.
The combined population of those two provinces almost equals Ontario’s 13.6 M. half of which is fluoridated. The fluoridated population is clustered in the GTHA and the cities of London and Ottawa and a few small centres. The current Ontario rate is 59.1% fluoridated.
Peter Van Caulart, VP COF-COF.ca