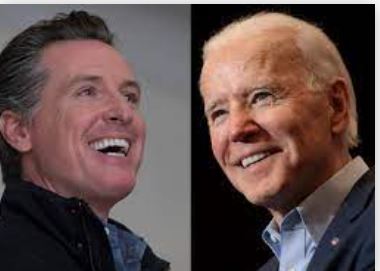 Not everyone, but many are aware of the backlog of goods coming into
California through the Ports of Long Beach and Los Angeles. These two
ports represent 40% of the nation’s entire international flow of goods
into the United States.  After months of emptying shelves at retail
outlets with little to replace the merchandise our vacuous leader in the
White House finally realized he should do something, anything that made
it seem like he had any measure of problem solving in his empty head.
His solution, requesting both ports to open up twenty four hours a day,
seven days a week. His belief upon learning that ships were queuing up
to be unloaded in large numbers allowed him to think that the port’s
unloading capacity was not met during normal opening hours.  One only
has to view the ports to realize that this was not the problem and
opening up 24/7 was not going to make any difference.

Biden’s fumbling response to the problem is yet another indicator that
his cognitive abilities and those that advise him are not up to the
task.  So, how has our State government stepped up to the plate?
Currently there is a bit of legislation, sure to be signed into law by
governor “Empty Suit”, prohibiting ships from anchoring off the coast in
Southern California.   Nice “save” by the State’s legislators, after all
we wouldn’t wish for more environmental damage to the coast line by
anything that might ease the product shortages here in the United
States.  Anything else in the way of solutions, and the silence is
deafening..

Aside from the huge mounds of containers already bursting the capacity
of both ports, it does not appear that there is much space for either
port to put cargoes from ships waiting to be unloaded.  HMMM… must be
something else amiss here.  Could it possibly be state and federal
regulations?  One would hope not… California legislators and our
governor saw fit to pass AB5 which in effect will eliminate nearly 80%
of California’s independent truck drivers from operating within the
State.  Coupled with California’s CARB regulations further reduce the
available freight trucks which can legally operate in Southern
California ports.  No trucks or drivers, means not much leaves either
port.  How’s that for geniuses at work in the State’s legislative branch
and the executive branch for failure to understand that the environment
and climate change are going to have to go on holiday for awhile until
someone smarter than Sacramento can figure out how to move goods without
trucking.

When you combine these two failures of the Newsom government, with no
remedy in sight, and couple those with inflation of diesel fuel prices,
difficulties with spare parts for trucks, and increased operating costs,
you have the perfect storm and the mess in the Ports of Long Beach and
Los Angeles.  Not only will this continue to plague California and the
rest of the Country for some time to come, Newsom and his cronies in the
Unions will be assured of making things worse as long as he is in
office.  Had enough “NO” voters, especially Democrats who have kept this
train wreck in office.

In order to at least temporarily ease the congestion at both ports it
may be necessary to suspend the constraints of both AB5, that is if the
Supreme Court doesn’t do it first, and be more reasonable about
California emissions with respect to freight trucks and other diesel
powered equipment.  Unfortunately, California’s legislators and
executive branch care more about the dollars flowing into their pockets
than the citizens of this State.  Be prepared for a rough ride going
forward.  Both the Ports of Long Beach and Los Angeles are going to be
bogged down for the foreseeable future.

4 thoughts on “More Stupidity From Sacramento”