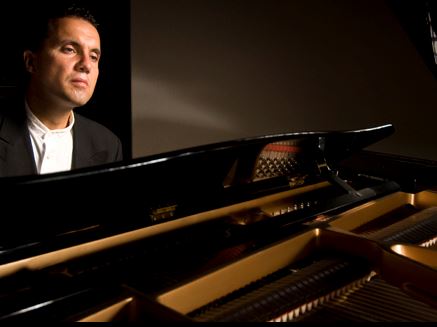 May 3, 2017 – A classical pianist from Canada, who now lives on a farm in Kentucky, is about to bring music to prison inmates in California.

Eric Genuis is the founder of Concerts for Hope, a nonprofit organization that produces concerts for people in prisons, patients in VA hospitals and residents of homeless shelters—“forgotten” people, as he calls them.

“As a society, we have become very comfortable with certain people being forgotten,” he said. “I work with top-shelf musicians to bring beauty into the lives of people who are suffering emotionally and physically.”

Genuis has recorded albums, scored movies and performed in concert halls around the world. But his Concerts for Hope give him the greatest personal satisfaction. Genuis often receives letters from inmates and their families, describing what his performances have meant.

In addition to audiences themselves, Genius has received support and praise from celebrities including actors Kevin James and Jim Caviezel and former NFL star Matt Birk (Baltimore Ravens and Minnesota Vikings). (Side note: Genuis appeared in James’ movie “Paul Blart: Mall Cop II, as a pianist.)

Joining Genuis for his California tour will be Simone Vitucci (a cellist, based in Los Angeles), Yongxiang Ren (a violinist, based in New York) and Cecily Gordon (a vocalist, based in Houston).

Eric Genuis was born in Toronto, Ontario, and graduated from the Royal Conservatory of Music with a degree in piano performance. His musical career began, when he was invited to perform at an AIDS benefit in Poland, for an audience of 15,000. He started touring the United States in 1997, and eventually moved to Denver, because of his love for skiing and hiking. Later, he and his family relocated to a farm close to Louisville, Kentucky, where his young daughter receives therapy from an acclaimed Down syndrome organization.

Information about Eric Genuis is available at www.EricGenuis.com and www.ConcertsForHope.net.